One year after the Cajun Navy fleet deployed to pluck stranded families from the flood waters that overwhelmed southeast Louisiana, the volunteer rescuers have mobilized again to help in the Houston area after heavy flooding from Tropical Storm Harvey.

A second wave of volunteers with the group gathered in Baton Rouge on Monday to head to the Houston area to provide additional support.

The group made it into Houston early Monday morning, poised to assist with rescue efforts in a region devastated by flooding due to Harvey.

The Cajun Navy is blasting social media with messages for help as neighbors in Texas face the same devastating flooding.

“We’re planning a large push to head in probably in the next day or so when things calm down about. It’s just something we have to play by ear a bit and see how the weather cooperates,” Jon Bridgers Sr., an organizer in charge of the Cajun Navy 2016 Facebook page, said Sunday. 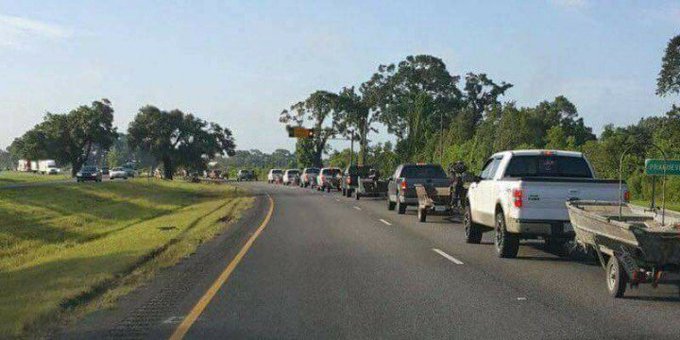 #Houston Hang on. The CAJUN NAVY is already activated and on the way.

Bridgers said he and others set out with boats towards Houston on Sunday but did not make it far. He said about 40 miles outside the city, the roads are impassable and that most of their volunteers can’t get through.  However, he said some have made it and are doing their best to help.

“We have been given the GREEN LIGHT to enter your area. This is what we need from YOU ALL. We are here to search and rescue,” wrote Gary Davis in another Facebook group.

Like the great flood of 2016, many families trapped in Houston are turning to social media, posting horrific pictures of families trapped by high water, pleading for help. Most posts include addresses and phone numbers. One video has been circulating of Montel Williams relaying information about a man in a broken wheelchair needing assistance.

Bridgers, and other volunteers are sharing those with the grassroots group with hopes of connecting rescuers on the ground in Houston with those victims.  He’s also helping organize volunteers collecting water and food to take to Houston once the water recedes.

“It’s going to be the same situation as what we had back last year,” said Bridgers.

Reddit
Severe Weather
One comment on “Cajun Navy arrives in Houston to help rescue flood victims; another wave heads out”