A woman will train with other potential officers this summer in hopes of becoming the first female Navy SEAL.

The candidate, a midshipman, and another woman have enlisted as the first female candidates seeking to join the Navy’s special operations teams.

The latter is training for the Special Warfare Combatant-Craft Crewman program, or SWCC.

These women have already made history, but they still face a long road ahead of training and tests before they officially make the cut. Women weren’t allowed to serve in combat roles, including special operation forces such as the SEALs and SWCC, until January 2016. But there were no female applicants in the 18 months since that historic change until now.
The candidates’ identities and training progress are confidential to protect their personal security and “career viability as future special operator,” Lt. Cmdr. Mark Walton, a spokesman for Naval Special Warfare Command, told CNN.
Eight SEAL and seven SWCC classes — all entirely male — have graduated since March 2016, according to a Naval Special Warfare Center briefing last month for the Defense Advisory Committee on Women in the Services. 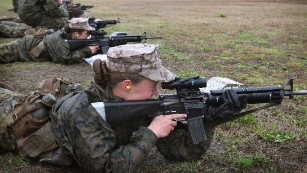 Get ready for more US women in combat
The SWCC candidate will undergo months of Navy training and screening evaluations, Walton said. The SEAL hopeful will be evaluated for three weeks at a SEAL Officer Assessment and Selection process in California as a prerequisite to SEAL training before moving on to a SEAL Officer Selection Panel in September.
Aspiring SEALs and SWCC candidates also go through rigorous Basic Underwater Demolition/SEAL training, or BUD/S. The training comes in physically and mentally challenging stages, beginning with two months of intense physical training in Illinois. Candidates must pass a physical screening test at the end of the first stage or face being kicked out.
U.S. military opens combat positions to women
The next stages include basic conditioning, combat diving and land warfare training. One week during basic conditioning is known as Hell Week — “the ultimate test of a man’s will,” according to the SEALs website.
The training is “designed to weed out the weak,” as the Navy special operations training website warns. It’s an accurate description, considering most candidates don’t make it: Seventy-three percent of aspiring SEALs and 63% of SWCC candidates fail to make the cut, according to the Naval Special Warfare Center briefing in June.
There are about 1,000 SEAL candidates who start training every year, Walton said. Usually only about 200 to 250 candidates make it all the way through training.
Diversity
3 comments on “Death by Diversity – First woman enlists to become a Navy SEAL”