New footage out of France in which migrants block a road with tree branches in an attempt to hijack a truck literally looks like it could be out of a horror movie.

The clip, filmed on a dashcam, shows the truck traveling down a dark road at night before migrants jump a barrier and run behind the vehicle.

The driver is then forced to stop as he realizes the road is blocked by two large tree branches.

The migrants continue to rush to the back of his now stationary truck, before the driver is forced to quickly reverse to try to escape being ambushed.

The migrants then scatter as he decides to try to run over the tree branches instead. His vehicle is pelted with missiles thrown by the migrants.

Just last week, a van driver was killed as a result of migrants leaving tree trunks on the road exactly as seen in the clip above.

In an incident that occurred at 4am, two trucks were forced to suddenly brake in an attempt to avoid the tree trunks, causing a third van that was unable to stop in time to crash into the other vehicles.

The van, which was registered in Poland, then caught fire, killing the driver, who was not immediately named because he couldn’t be identified “given the state of the body”.

Earlier this month, footage also emerged of migrants setting up burning roadblocks in an attempt to hijack trucks in a bid to illegally enter the United Kingdom, where benefits are perceived to be more generous than in France.

Despite the Calais migrant camp being razed to the ground by French authorities last year, migrants have returned to the area in huge numbers, aided by volunteers for leftist NGOs feeding them in violation of a municipal order to stop. 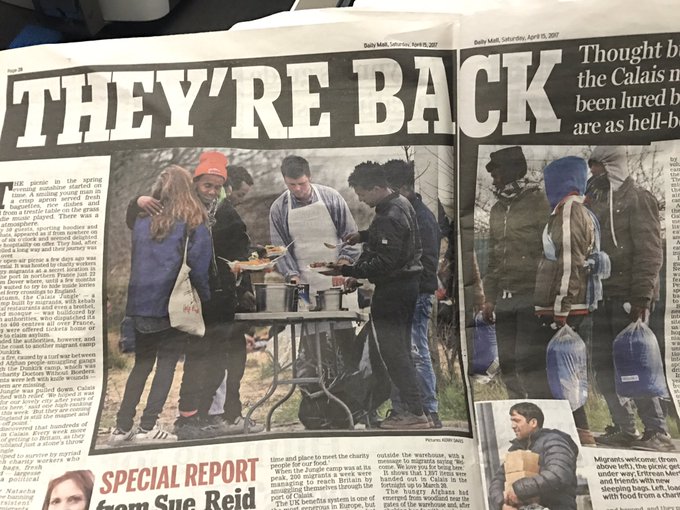 Useful idiot leftists are drawing migrants back to Calais with free food. Note the total absence of women & children.

France
One comment on “The Death of Europe: Migrants in Calais Try to Hijack Truck, Harass Travelers”