Two U.S. guided-missile destroyers fired 59 Tomahawk Land Attack Missiles in a series of strikes on a Syrian airfield believed to be the origin point of a chemical weapons strike in the northern part of the country, several military officials told USNI News on Thursday night.

Destroyers USS Porter (DDG-78) and USS Ross (DDG-71) launched the strike from the Eastern Mediterranean at 8:40 p.m. Eastern Daylight Time, or 4:40 a.m. on April 7 in Syria, Pentagon spokesman Capt. Jeff Davis told reporters in an email statement. Davis added the U.S. military warned Russia of the attacks before the cruise missiles were launched, in accordance with deconfliction policies set up with both U.S. and Russian military assets operating, at times towards opposing goals, in close quarters.

The Tomahawk strike was centered on the al-Shayrat Airfield, which was believed to have launched the fixed-wing planes that carried out a chemical weapons strike on Tuesday on the town of Khan Sheikhoun. The strike by Assad government forces is believed to have killed dozens.

“Tonight, I ordered a targeted military strike on the airfield where the chemical attack was launched,” President Donald Trump said in a pre-recorded statement issued to the press.
“It is in this vital to the national security interest of the United States to prevent and deter the spread and use of deadly chemical weapons. There can be no dispute that Syria used banned chemical weapons, violated its obligation its obligation under the chemical weapons convention and ignored the urging of the U.N. Security Council.” 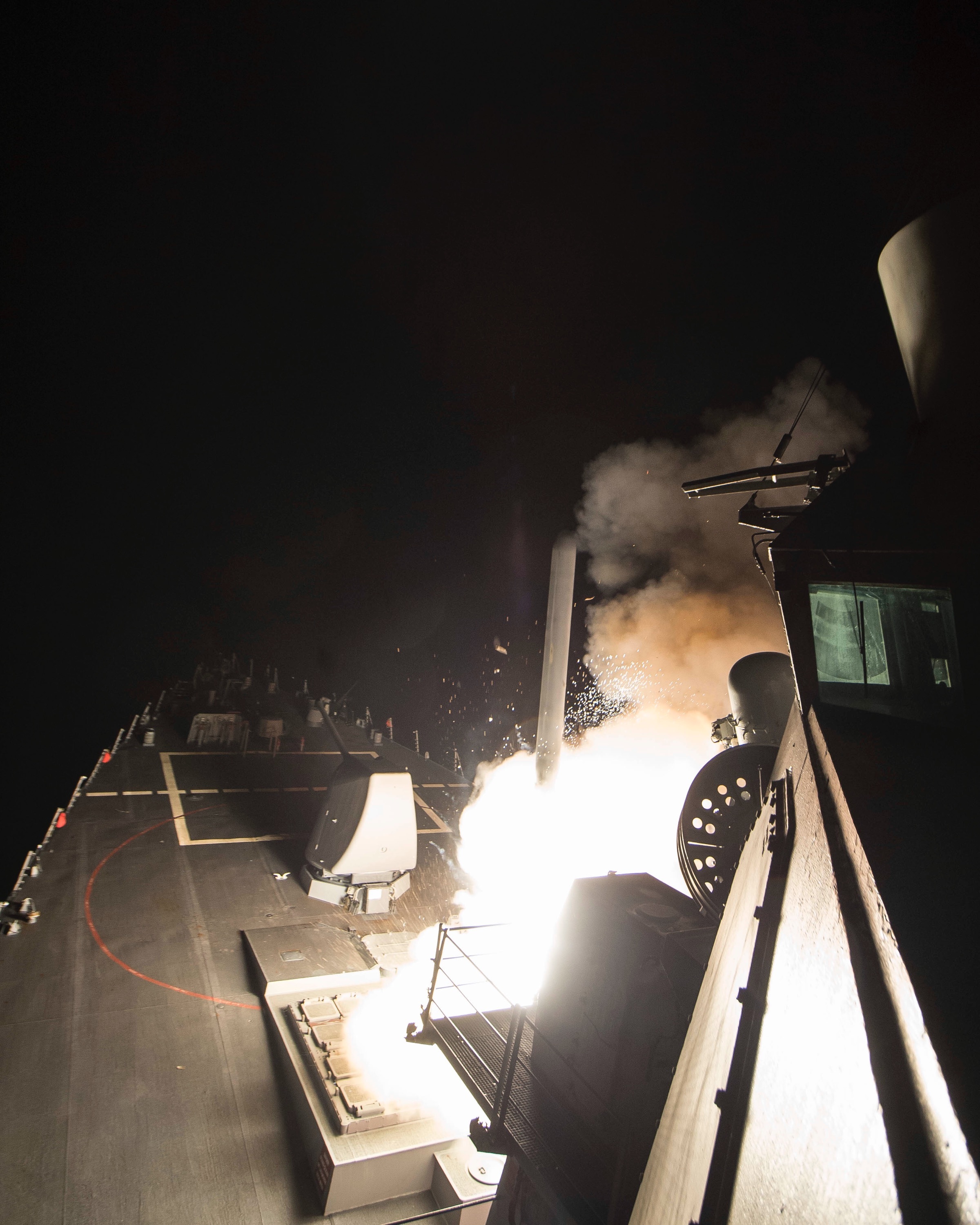 Davis said in his statement that “the strike was conducted using Tomahawk Land Attack Missiles (TLAMs) launched from the destroyers USS Porter and USS Ross in the Eastern Mediterranean Sea. A total of 59 TLAMs targeted aircraft, hardened aircraft shelters, petroleum and logistical storage, ammunition supply bunkers, air defense systems, and radars. As always, the U.S. took extraordinary measures to avoid civilian casualties and to comply with the Law of Armed Conflict. Every precaution was taken to execute this strike with minimal risk to personnel at the airfield.”

A U.S. military official told USNI News that Russian forces in the country were given a “heads up” ahead of the launch of the missiles. Secretary of State Rex Tillerson said in a statement that the U.S. did not seek Moscow’s permission for the strike. 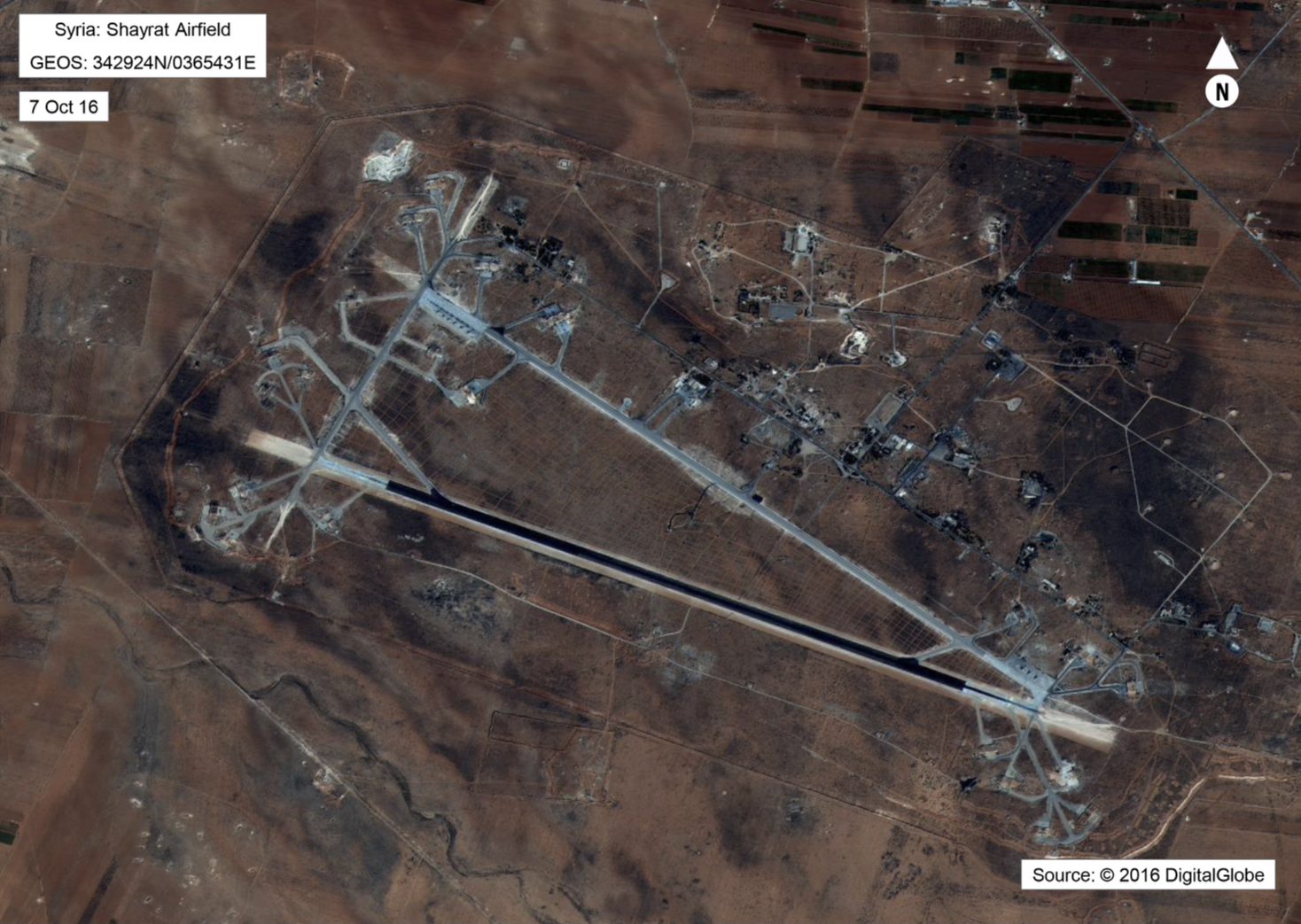 Image courtesy of the Defense Department.

Sen. Marco Rubio (R-Fla.), who serves on the Senate foreign relations and intelligence committees, told CNN’s Anderson Cooper this evening that “I don’t believe this is a message; I believe this is actually a tactical action that furthers an objective, which is important. My guess is, and I think you’ll see confirmation of it shortly, al-Shayrat Airfield, which is where these chemical attacks were launched from with fixed-wing aircraft a couple days ago, is going to be the target, and that is the airfield from which the chemical attacks were launched. It’s also a critical point in a part of the country where they’re battling rebels, non-ISIS rebels, in the northern part of Syria. So as I said, it’s an important and decisive step that was taken. It is not a message; it is an actual degrading of the capability of Syrian regime to carry out further chemical attacks against innocent civilians. This will degrade their capability to launch those attacks from the air, and I think it was an important step and hopefully it’s part of a comprehensive strategy moving forward to bring to a close this chaos that’s happening in Syria.”

Asked about the significance of this first attack in the bigger context of the ongoing situation in Syria, Rubio told Cooper, “I’m not saying this accomplishes everything, but I am telling you that this is the area from which those chemical attacks were launched and where we were going to see future attacks come from, particularly targeting innocent civilians in an area where the regime felt it was losing territory after making significant gains.”

Regarding Russian forces operating nearby in Western Syria, Rubio told CNN that “I imagine they were not the ones targeted but again, if the Russians are there on the ground assisting Assad in the commission of these heinous crimes, war crimes, they should answer for that, and they certainly have put themselves in harm’s way. The second point I would make in regards to all this is the absurdity of the Russian position. With a straight face they are arguing that these chemical weapons are actually because of the rebels, which is absurd. And the third point is, Russia should be embarrassed and ashamed, they are the ones telling the world that there were no nerve agents, that there were no chemical weapons left. We know that for the better part of this year Assad has been using chlorine bombs against innocent civilians and population centers, and now a couple days ago a nerve agent, Sarin. So the Russians have been covering for Assad, and if not for the Russians Assad would not be in power, and if not for the Russians Assad would not have the capability and much less the gall to conduct the sort of attack we saw just a couple days ago.”

Senate Armed Services Committee chairman and member Sens. John McCain (R-Ariz.) and Lindsey Graham (R-S.C.) released the following statement tonight: “We salute the skill and professionalism of the U.S. Armed Forces who carried out tonight’s strikes in Syria. Acting on the orders of their commander-in-chief, they have sent an important message the United States will no longer stand idly by as Assad, aided and abetted by Putin’s Russia, slaughters innocent Syrians with chemical weapons and barrel bombs.

“Unlike the previous administration, President Trump confronted a pivotal moment in Syria and took action,” the statement continues.

“For that, he deserves the support of the American people. Building on tonight’s credible first step, we must finally learn the lessons of history and ensure that tactical success leads to strategic progress. That means following through with a new, comprehensive strategy in coordination with our allies and partners to end the conflict in Syria. The first measure in such a strategy must be to take Assad’s air force—which is responsible not just for the latest chemical weapons attack, but countless atrocities against the Syrian people—completely out of the fight. We must also bolster support for the vetted Syrian opposition and establish safe zones to address the ongoing humanitarian crisis. As we do, we can and must continue the campaign to achieve ISIS’s lasting defeat.”

The following is the complete statement sent by Pentagon spokesman Capt. Jeff Davis:

At the direction of the president, U.S. forces conducted a cruise missile strike against a Syrian Air Force airfield today at about 8:40 p.m. EDT (4:40 a.m., April 7, in Syria). The strike targeted Shayrat Airfield in Homs governorate, and were in response to the Syrian government’s chemical weapons attack April 4 in Khan Sheikhoun, which killed and injured hundreds of innocent Syrian people, including women and children.

The strike was conducted using Tomahawk Land Attack Missiles (TLAMs) launched from the destroyers USS Porter and USS Ross in the Eastern Mediterranean Sea. A total of 59 TLAMs targeted aircraft, hardened aircraft shelters, petroleum and logistical storage, ammunition supply bunkers, air defense systems, and radars. As always, the U.S. took extraordinary measures to avoid civilian casualties and to comply with the Law of Armed Conflict. Every precaution was taken to execute this strike with minimal risk to personnel at the airfield.

Russian forces were notified in advance of the strike using the established deconfliction line. U.S. military planners took precautions to minimize risk to Russian or Syrian personnel located at the airfield.

We are assessing the results of the strike. Initial indications are that this strike has severely damaged or destroyed Syrian aircraft and support infrastructure and equipment at Shayrat Airfield, reducing the Syrian Government’s ability to deliver chemical weapons. The use of chemical weapons against innocent people will not be tolerated.