A new email released as part 12 of the Podesta Wikileaks dump reveals that long term Clinton confidante Neera Tanden complained about Hillary not knowing what planet she was on.

In the email, Tanden complains to Clinton campaign chairman John Podesta after Hillary told an audience in Ohio, “You know, I get accused of being kind of moderate and center, I plead guilty.”

“Why did she call herself a moderate?” asks Tanden.

“I pushed her on this on Sunday night. She claims she didn’t remember saying it. Not sure I believe her,” responded Podesta. 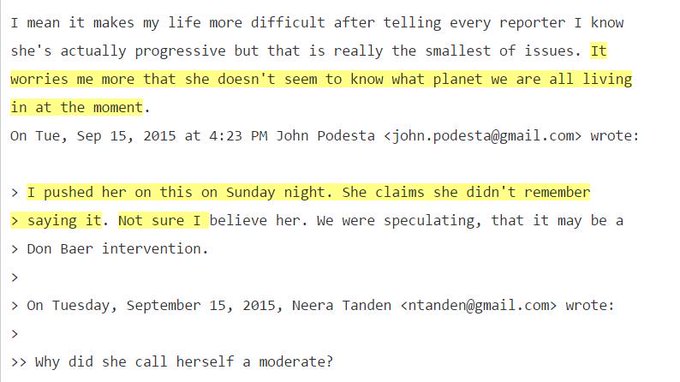 “I mean it makes my life more difficult after telling every reporter I know she’s actually progressive but that is really the smallest of issues. It worries me more that she doesn’t seem to know what planet we are all living in at the moment,” Tanden answered.
Tanden is described by Politico as “a longtime Clinton confidante and influential policy-politics-communications adviser.”

Whether the line is in reference to Hillary’s ailing health causing her memory lapses or merely her rapidly shifting political positions is not known – it could be both.

Either way, the email emphasizes the Clinton’s campaign’s problem with Bernie Sanders supporters, and their attempts to re-mould Hillary as a more radical “progressive” to disguise the fact that she is an establishment insider.