The former director of policy planning for the U.S. State Department wrote that sending “sensitive” content to private email accounts was the norm under Secretary Clinton, emails published by WikiLeaks reveal.

Anne-Marie Slaughter, who served at the department from January 2009 until February 2011, stated “off the record” to New York Times columnist Thomas L. Friedman that “EVERYONE at State” used private email for government-related business. 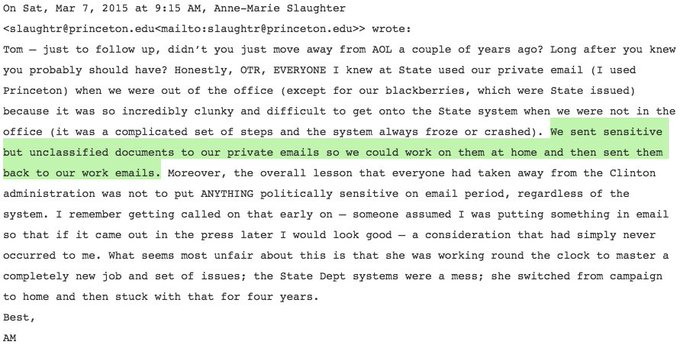 “Honestly, OTR, EVERYONE I knew at State used our private email (I used Princeton) when we were out of the office…” Slaughter wrote.

Explaining her disdain for the department’s “incredibly clunky and difficult” BlackBerry phones, Slaughter admitted that “sensitive” documents were often sent from the State Department to employee’s personal emails.

“We sent sensitive but unclassified documents to our private emails so we could work on them at home and then sent them back to our work emails,” she said.

Slaughter also recalled that keeping “politically sensitive” information out of emails was a higher priority than protecting sensitive government documents.

“Moreover, the overall lesson that everyone had taken away from the Clinton administration was not to put ANYTHING politically sensitive on email period, regardless of the system,” she wrote. “I remember getting called on that early on — someone assumed I was putting something in email so that if it came out in the press later I would look good — a consideration that had simply never occurred to me.”

Public employees using personal email accounts to conduct government business has long been an issue. Former Secretary of State Colin Powellused personal email during his time at the State Department as well.

The comments were uncovered Wednesday in WikiLeaks’ 19th release of Clinton campaign chairman John Podesta’s emails. This latest batch brings the total number of published Podesta emails up to 33,042.