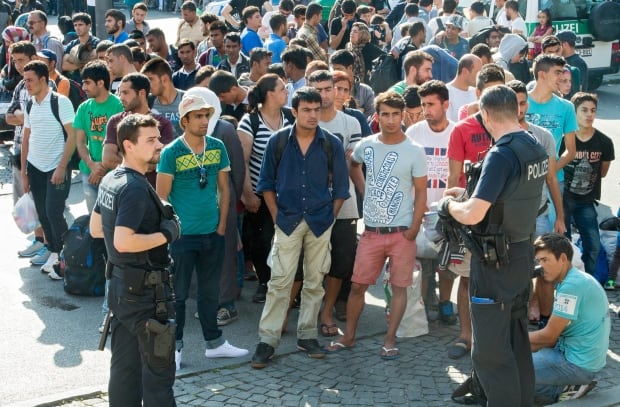 Germany is in crisis. It is a crisis that Germany has created itself, along with assistance from the Obama administration, whose horrific foreign policy and leadership and refusal to finish off ISIS, has created a refugee nightmare not seen on the continent since 1945.

Out of the chaos of the Middle East, migrants are arriving in Europe by boat, on foot, by train, by any means necessary to stay out of the line of fire. For many their destination is the land of cuckoo clocks, the autobahn and free government handouts, Germany.

Why is Chancellor Angela Merkel allowing this to happen to her country? Supposedly, a conservative, she is a popular, pragmatic leader who garnered respect throughout the world. No doubt, she must adhere to the demands of leftist and socialist factions in her country and parliament, but her decision to allow what will soon be a million migrants into Germany is an unprecedented disaster for Germany and the West.

The migrant crisis and the subsequent and eventual creation of a huge population of Muslim, non-Germans in Germany may possibly be the final death knell for the fatherland.

The Germans lost nearly six million people in the 1800’s who immigrated to the United States for a better life; people like my great, great grandfather, Georg Starmann.

At the beginning of the 20th Century 1.7 million German men were killed in World War I.

Twenty years later in World War II, the Germans lost nearly eight million people and the nation found itself devastated, a virtual ghost landscape of rubble and ash and bodies. For the Germans it was time to reset the clock, in what the Germans called “Stunde Null” or Zero Hour.

From Zero Hour came the Marshall Plan and the great postwar economic boom in Germany, built on the foundations of US greenbacks and German sweat and toil.

But, the Germans didn’t do it alone. They were assisted by tens of thousands of guest workers from Turkey. While a small percentage stayed indefinitely in Germany, most went back home with pockets full of crisp, new German Marks. The guest worker program worked fine. The Turks were tiny in number and Turkey, an ally of Germany was always the most Western country and most progressive of all the Muslim nations in the Middle East.

With shiny new buildings and factories and cars came a new government, built on long-standing Bismarckian socialist traditions for 80 years. In exchange for a lifetime of hard work, the German population would be guaranteed cradle to grave benefits.

On the surface while everything was booming in Germany, on the inside, traditional values like the family were being swept aside for the worship of big government. Socialism created an aging population and a nation not of strutting studs in military uniforms, but of dumpy, leftist women in Birkenstocks who scoffed at the traditional female German values of Kinder, Kueche, Kirche (children, kitchen, church).

And, now the Germans need young people and they need workers for their booming economy. Unfortunately, the migrants storming into the train stations, bus depots and airports are not what the doctor ordered.

Seventy-five percent of the migrants are single, young men, and ripe for recruitment in ISIS or any other radical Islamic group. Germany is creating a dangerous, volatile Fifth Column of mainly un-vetted Muslim men who are just itching for a fight with Judeo-Christianity and the West.

They are in effect creating a sub-population of potentially millions of people who (if the past is prologue) absolutely refuse to assimilate into German society, which in no uncertain terms means speaking German instead of Arabic, following German laws instead of Sharia law and adapting to the cultural ways of the West.

Germany is the biggest player in Western Europe, the economic and political power on the continent. German instability creates instability in Europe which puts NATO in danger. When NATO is in danger, the United States is in peril. Events in Germany simply aren’t affecting the people of Hanau or Munich. They have rippled across the Atlantic to American shores as well.

What can Germany do? Out of compassion, they could keep migrant families intact in the country, but they should deport every single male who has shown up on their doorstep. These men from Syria and Iraq and even Afghanistan need to be fighting for their countries against ISIS and the Taliban, not waiting in line for a handout from Angela Merkel.

Perhaps, subconsciously the Germans still feel some guilt from the war. While the wartime generation is almost gone, the present day Germans may feel that by destroying their culture and the very fabric of their society they can atone for the millions that died at the hands of their fathers and grandfathers.

They are doing a good job of committing national suicide. Operation Bedlam is proceeding on schedule.