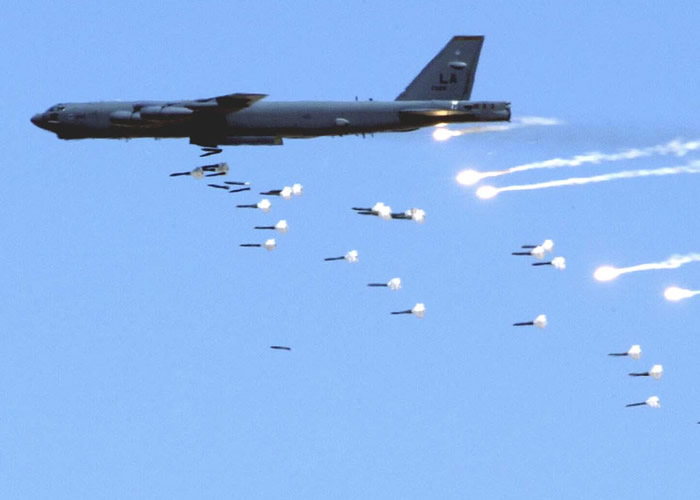 For the last two years, the Islamic State, better known as ISIS or ISIL, has conquered and murdered and tortured its way across the Middle East, in a reign of terror, not seen by the world since World War II. ISIS is not a terrorist group, but rather a paramilitary organization, which is desperately attempting to become a nation state and one powered by fear, intimidation and death.

The US has failed miserably in its attempt to defeat ISIS. In all honesty, it’s hard to defeat ISIS when you really aren’t fighting them at all. The US led air campaign against ISIS is something out of MASH’s “Five O’Clock Charlie,” the incompetent North Korean pilot in a World War I biplane, who, armed with one bomb, never hits anything.

Under Operation Inherent Resolve, US aircraft attempt to fly a half a dozen of sorties a day and usually return with their ordnance because of a lack of US controllers on the ground.

Until yesterday’s Delta Force raid on the ISIS compound in Northern Iraq, the US had never engaged ISIS in ground combat. Although, it is possible that the media and the public have been completely left in the dark on other special operations that have been conducted. But, let’s remember it is the Obama administration, so we probably haven’t conducted any ops like this in the last four years.

What would a serious multi-faceted campaign against ISIS look like? For starters, it would encompass a real air campaign, not the politically correct fiasco currently underway. Yes, ISIS doesn’t present as many targets as Saddam’s Iraq in 1991, but there is no doubt that anywhere from 300-500 sorties could be conducted against ISIS targets in Syria and or Iraq every day and night. With a real air campaign, ISIS would be formally introduced to some of the nice characters in the US Air Force’s and US Navy’s bags of death. They would meet the Spectre AC-130 gunship, the cluster bomb, napalm, the Daisy Cutter and if we were in a particularly bad mood that day, the B-52.

A serious military campaign against the bad men with beards would also consist of multiple, daily and nightly direct action missions against ISIS targets by the Rangers, Delta and the SEALs. One of the tactics that could be employed would be for special ops to sneak into an ISIS camp one night and kill everyone except for one lucky guy. He would wake up the next morning and find his comrades all wearing Colombian neckties. Word would quickly spread that these Americans weren’t community organizers.

An example of a psychological operation or “psy op” that could be employed would be for the US to drop leaflets to ISIS similar to the ones we dropped during the Gulf War. Such a leaflet would read:

“Dear ISIS members, Tomorrow at 1200 hours local time, we will drop the world’s largest conventional bomb on your position. Flee now and surrender to the first Arab coalition troops you see, or you will die. Kisses and hugs, the US Air Force.”

We could destroy ISIS in a matter of weeks, not months…if we had the will. We would need troops on the ground to secure the areas retaken by Allied forces. Those troops would have to come from the Arab nations and perhaps NATO countries like Turkey.

No doubt, and as usual, the US would have to do the majority of the dirty work in the region. But, after ISIS was severely beaten, the Arab armies could move in and mop up and get the glory. A prime example of this is the Battle of Khafji in the Gulf War, where the Marines did the majority of the fighting, and then handed the battle off to the Saudis and Qataris who moved into the town and destroyed the last remaining pockets of resistance. That victory gave them a much needed morale boost.

Our brave and competent Kurdish allies would be emboldened to seize much of the territory they’ve lost in Northern Iraq. With Special Forces advisers on the ground and real air support this time, there is no doubt the Kurds would be victorious.

A powerful US military operation in the region would get the Russians’ attention. The Russians only respect one thing, brute force. They would obviously see that the US meant business. They would hesitate about making any more reckless moves in the Middle East. We could destroy ISIS in Iraq then hit them in Syria. With a US led campaign operating in Syria, it might lead to a division of the country, with Assad controlling a small sliver and his back pinned to the sea. A US backed government would control Northern and Western Syria.

No doubt, yesterday’s raid has caused ISIS to think twice and have some newly found respect for the US. They have been laughing at our air campaign for over a year now and have even been emboldened by it and our lack of power projection in the region. It’s time to take off the gloves and deal a lethal blow to the Islamic State.

Your average ISIS thug hopes to meet 72 virgins. Instead, let’s introduce him to 72 armed Virginians.

Iraq, ISIS, Ray Starmann, US Air Force
3 comments on “It’s time to take off the gloves and deal a fatal blow to ISIS”