A cyclist pauses next to a billboard in Ho Chi Minh City featuring the 40th anniversary of the communist victory over former South Vietnam on April 30, 1975.(HOANG DINH NAM/AFP/Getty Images)

South Vietnam’s capital city, Saigon, fell to invading North Vietnamese troops on April 30, 1975. The image of an overloaded Huey helicopter on top of the U.S. Embassy in Saigon, frantically loading refugees, was forever seared into the American mind. It was the ignominious end of more than a decade of involvement by the United States in Vietnam.

Ultimately, Washington’s failure to win the war in Vietnam resulted from factors beyond the conflict zone. The United States was heavily constrained by its global commitments — principally its need to secure Western Europe against Warsaw Pact invasion. Washington could not align military capabilities with realistic political goals to justify bringing the full might of U.S. armed forces to bear to defend its peripheral interests in Vietnam. Unable to comprehend North Vietnamese resolve and incapable of bringing about a swift victory, the United States’ will to continue the war crumbled as the human cost mounted. Today, the dominant narrative among the American public is that that Vietnam was a crushing American defeat. 40 years after the fall of Saigon, however, it is apparent that Vietnam had only a limited impact on the overall U.S. position within the broader context of the Cold War.

The United States’ involvement in the Vietnam War resulted from the evolution of U.S. grand strategy in the wake of World War II. As part of the overall containment structure that Washington hoped to set in place around the Soviet Union — and eventually China as well — a network of allied countries became necessary to block the spread of communism. Many allies found themselves in direct proximity to the communist states America wanted to contain. This meant that any future war between the West and the Soviet Bloc would not be fought in the NATO heartland, but on the far-flung fringes of the two camps’ spheres of influence.

At the root of Washington’s alliance structure was the promise of U.S. support, hardened by what was supposed to be seen as a clear guarantee of assistance should the worst happen. In a divided Europe, for example, an attack on West Germany would be treated as an attack on the United States. Washington had given its word to assist, but by doing so, it put its credibility on the line. Despite written obligations, it was a constant struggle to fully convince the NATO allies that the United States, an ocean away, would truly risk nuclear war to defend West German soil in the event of a Warsaw Pact invasion. 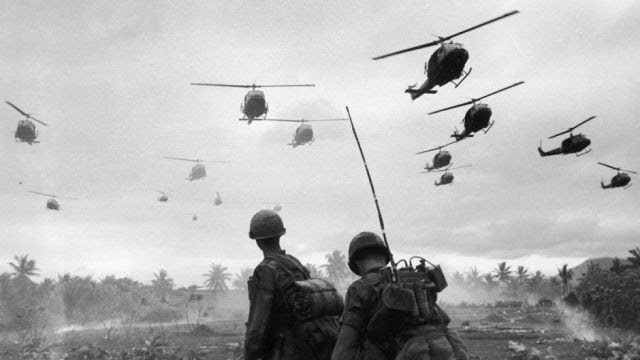 A wave of helicopters from the 1st Air Cavalry Division fly over an isolated landing zone during Operation Pershing, in the region of the Bong Son Plain and An Lao Valley of South Vietnam, Jan. 3, 1967. (PATRICK CHRISTAIN/Getty Images)

This ambiguity was not lost on Moscow, and Russia continued to probe and pick at the perceived fault-lines in the American grand plan. By manufacturing crises, the Soviets hoped to generate a crippling uncertainty in America’s allies while emboldening their own clients. The Soviet insinuation was that, at a critical moment, the United States would not make good on its promises. So, when the United States found itself more and more involved in Vietnam, Washington was less interested in what Saigon was thinking or doing, or its virtues as a government, and more concerned with how its other allies, especially those in Europe, perceived the seriousness of the U.S. commitment to check the spread of communism within an allied country. When it came due for the United States to live up to its word, it was the international community and not Saigon that Washington looked toward.

A Small Part of a Big Standoff

Vietnam was one small piece of a much bigger security challenge for Washington, with little intrinsic geopolitical value of its own. The real battles of the period — political and otherwise — were in Central Europe. Europe had to be prioritized, for if its resources and industrial capacity fell to the Warsaw Pact, the United States and its remaining allies would be unable to compete on either an economic or a military basis. For North Vietnam, however, the commitment to national unification was absolute. It pursued its own fundamental geopolitical interests and would give everything to achieve a victory — a single-minded devotion reflected in the horrendous casualties it suffered and the decades of conflict it endured. In the spectrum of conflict, the North Vietnamese were willing to embrace totality. This resolve was backed up with the support of powerful benefactors, namely the Soviets and the Chinese. From the United States’ perspective, committing the resources of the entire country against the North Vietnamese flew in the face of rational wisdom. Washington just had too many other interests. The conflict was ultimately decided by this imbalance of resolve. 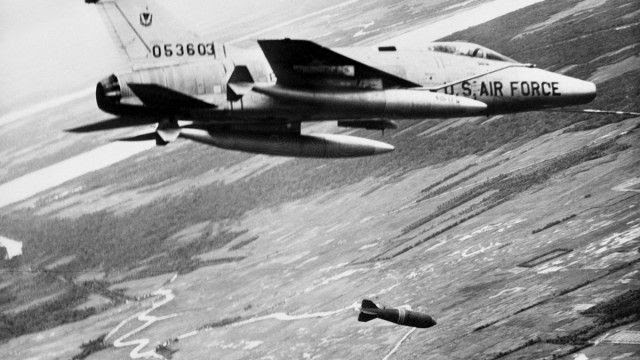 The argument remains that the United States could have beaten North Vietnam by committing more forces. While this may be accurate, the United States, burdened by its greater contest with the Soviet Union, could not afford to trade the security of its global commitments for a localized victory in Vietnam. The fact of the matter remains that the defense of Indochina was only worth a certain amount of blood and treasure. The U.S. military was saddled with self-imposed constraints and only allocated limited resources to the campaign that, ultimately, proved insufficient for an extended nation-building effort. The United States had to think about strategic balance elsewhere and was limited in what it could realistically commit. Securing the resources required to defeat a massive foreign-sponsored insurgency in the dense Vietnamese jungle had little chance of finding political backing. The fact that the American public deeply opposed the war — a direct result of Vietnam’s murky strategic significance — further eroded the tenuous support for U.S. operations in Vietnam. 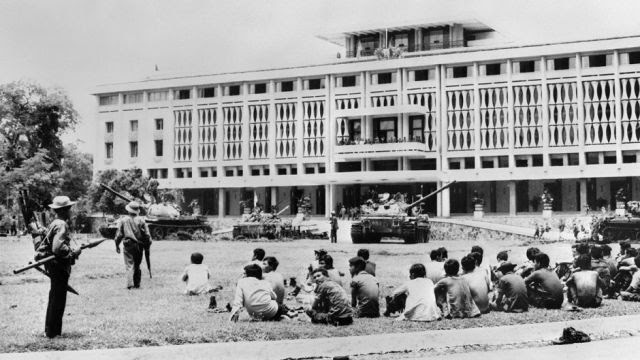 Provisional Revolutionary Government fighters seize control of the presidential palace in Saigon after the fall of the city. May 3, 1975. (-/AFP/Getty Images)

Once troops were committed, the rationale of Washington’s grand strategy maneuvered the United States into a damning position. U.S. leaders believed that by circumventing the conflict, and showing that the United States was willing to welch on its promises, irreparable fissures could have weakened the alliance structure Washington had fought so hard to construct. Conversely, being unable and unwilling to fully commit to a conflict over a peripheral interest, a clear victory could not be assured, especially against a dedicated and well-supported enemy.

The United States did not retreat from the world in the wake of Vietnam. Still determined to contest Soviet influence but eager to avoid overcommitting itself again in the developing world, Washington became more judicious in its use of military force. Instead of relying on direct interventions, Washington shifted the burden of fighting to its clients across the world, providing less direct assistance when necessary. These shadowy operations were well suited for areas of peripheral importance. When they failed, their costs were relatively small; when they succeeded, they often had an outsize impact. This was demonstrated during the Soviet invasion of Afghanistan, when the Soviet Union found that it was not prepared to pay the costs of a long counterinsurgency against U.S.-backed mujahideen. 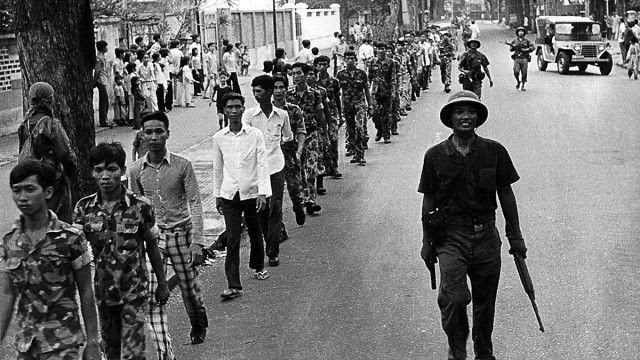 A line of captured South Vietnamese soldiers walk through the streets of Saigon on April 30, 1975, escorted by communist troops. (AFP/AFP/Getty Images)

The Vietnam War is popularly remembered as a U.S. defeat at the hands of an enemy a fraction of its size but, from a broader geopolitical perspective, it is hard to say what the United States really lost. The human cost of the war was certainly tremendous. Some 58,000 U.S. soldiers gave their lives in the conflict, and the war exacerbated huge social rifts in American society. Millions of Vietnamese perished on both sides — along with hundreds of thousands of people in Laos and Cambodia. Both victor and vanquished inherited a country broken by decades of war.

For the United States, the war was over in 1975. For the people of former Indochina, war would continue until 1979, consuming untold millions of lives. Yet, Washington’s worst fears did not materialize with the fall of Saigon. The United States retained its overall combat power and U.S. allies did not break from NATO en masse. The Soviets did not cross the Fulda Gap into West Germany, emboldened by a supposedly conspicuous collapse of U.S. resolve. Perhaps the U.S. refusal to empty its garrisons in Western Europe was far more meaningful a sign for America’s allies and adversaries than an iron commitment to Vietnam. Ultimately, for the United States, the geopolitical cost of the war was greatly overestimated.