Berlin’s New Year’s Eve party at the Brandenburg Gate will feature a “safe zone” for women to protect them from rape and sexual assaults by gangs of migrant men.

Women who feel “harassed” will be able to seek help from a special “safety zone” located on Ebertstrasse which will be staffed by the German Red Cross.

While organizers will obviously never acknowledge it, the “safe zone” is blatantly designed to protect women from sexual assaults by predominantly Muslim migrant men.

Even the far-left BBC admits that the safe zone is a response to events two years ago in Cologne, which have since been repeated in other cities, when “Hundreds of women reported being attacked by gangs of men with migrant backgrounds.”

Shocking footage that later emerged from the night shows women screaming as they are assaulted, with police totally overwhelmed and unable to properly respond.

One eyewitness, a hotel security guard who fought off some of the attackers, said police told him the scene resembled a “civil war”.

Some women were pinned down and raped by the migrants, with one victim even being impregnated and later forced to have an abortion.

Despite the unprecedented chaos, the German media failed to report on the attacks for days, with police subsequently “ordered to remove the word “rape” from their initial report.”

Cologne’s pro-refugee Mayor Henriette Reker responded to the incident by trying to absolve Muslim migrants of blame and was derided for suggesting that women prevent further attacks by keeping the men at “arm’s length”.

German Interior Minister Ralf Jaeger also asserted that conservatives who criticized the wave of migrants flooding into the country on Internet chat rooms were “just as awful” as the migrants who sexually molested women.

Despite virtually all of the perpetrators being asylum seekers and men from migrant backgrounds, Germany’s public broadcaster later released a documentary claiming the migrants were wrongly accused and that the real perpetrators were white German men.

Feminist groups also responded by visiting the local refugee center and handing out roses to some of the very same migrants who may have bene involved in the attacks in order to apologize for “xenophobia”.

The following year, hundreds of police were deployed to the same location as a huge mob of around 650 North African men showed up in a bid to repeat the attack, prompting leftists to criticize the policefor racially profiling. 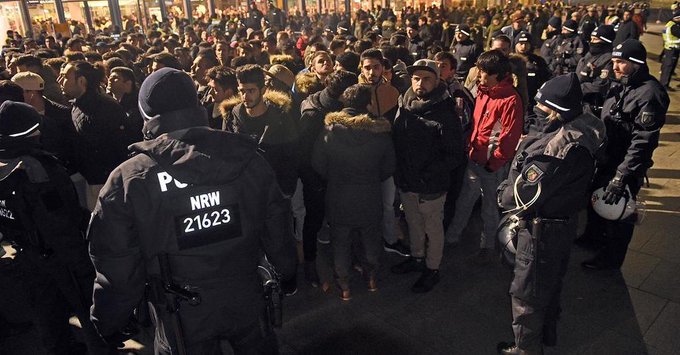 Given what happened last year in Cologne, what on earth would possess these idiots to converge in huge mobs yet again?

According to professor Jörg Baberowski, the attacks were meant to send a message to Europeans that they “cannot protect” their women.

It remains to be seen whether so-called “safe zones” will be enough to protect women and whether the media will again attempt to cover up mass sex attacks this time around.

Given this recent history, is it any wonder that the anti-immigration AfD swept to third place in Germany’s election earlier this year amidst crumbling approval ratings for Chancellor Angela Merkel?