SEOUL—North Korea said it conducted a sixth and significantly larger nuclear test Sunday, stepping up pressure on President Donald Trump in what is shaping up to be his biggest foreign policy crisis.

In a televised statement, North Korea described the underground explosion, which triggered a large earthquake, as a “perfect success in the test of a hydrogen bomb for an ICBM.” Pyongyang said “the creditability of the operation of the nuclear warhead is fully guaranteed.”

The test came just hours after leader Kim Jong Un showed off what he described as a hydrogen bomb capable of being mounted on an intercontinental ballistic missile.

The explosion at the nuclear test site at Punggye-ri in North Korea’s mountainous northeast triggered an initial magnitude-6.3 earthquake, followed by a magnitude-4.1 temblor that was possibly caused by a structural collapse, according to the U.S. Geological Survey.

While it was unclear what set off the second quake, satellite imagery has captured evidence of tunneling activity at the nuclear test site in recent months. Any structural collapse might have been related to that.

The latest nuclear test was estimated to have a yield of as high as 100 kilotons—about 10 times the power of the North’s previous test and roughly five times that of the atomic bomb that the U.S. dropped on Nagasaki, Japan, in 1945, according to Kim Young-woo, a South Korean lawmaker who is chairman of the legislature’s defense committee and received a briefing from military authorities.

A spokesman for the defense ministry declined to comment.

Norsar, a Norwegian nonprofit foundation with a focus on seismology, estimated the explosive yield at 120 kilotons, based on a 5.8-magnitude assessment of the explosion.

South Korea’s national security adviser, Chung Eui-yong, said after a 90-minute emergency meeting of the National Security Council that Seoul would consider the possible deployment of what he described as the “most powerful strategic assets that the U.S. possesses,” without elaborating, according to a statement from the presidential Blue House.

The phrase “strategic assets” typically refers to stealth bombers, aircraft carriers or possibly nuclear weapons. The U.S. withdrew the last of its nuclear weapons from South Korea in 1991.

Mr. Chung, who also spoke by phone with Lt. Gen. H.R. McMaster, his counterpart at the White House, said that Moon Jae-in, the South Korean president, had called for the “strongest punitive measures” against Pyongyang. That includes diplomatic measures and a new United Nations Security Council resolution to “completely isolate North Korea.”

North Korea has conducted a major Nuclear Test. Their words and actions continue to be very hostile and dangerous to the United States…..

..North Korea is a rogue nation which has become a great threat and embarrassment to China, which is trying to help but with little success.

South Korea is finding, as I have told them, that their talk of appeasement with North Korea will not work, they only understand one thing!

In Sunday morning tweets, Mr. Trump said North Korea’s “words and actions continue to be very hostile and dangerous to the United States.” He added: “North Korea is a rogue nation which has become a great threat and embarrassment to China, which is trying to help but with little success.” He also added: “South Korea is finding, as I have told them, that their talk of appeasement with North Korea will not work, they only understand one thing!”

While North Korea has made steady advances in both its nuclear and missile programs over the course of decades, Mr. Kim has greatly accelerated the pace of testing as the isolated country nears the ability to deliver a nuclear-tipped missile to the continental U.S.

Just this year, it has conducted a string of successful missile tests that have extended the proven range of its arsenal and introduced new capabilities that allow Pyongyang to fire missiles more quickly and with less warning. In July, it test-fired two ICBMs that experts say they believe are capable of reaching many parts of the U.S. mainland.

“The Kim regime made the strategic decision to develop a nuclear armed ICBM that can strike the United States,” said Leif-Eric Easley, a professor of international studies at Ewha Womans University in Seoul. “It is in a sprint to deploy that capability, because it wants the world to recognize it before returning to diplomatic talks, and before sanctions become unbearable.”

However, analysts have been divided on whether North Korea could shrink a nuclear warhead to fit on the tip of a missile. Many also remain skeptical about whether a North Korean warhead can survive the strain of re-entry into the Earth’s atmosphere.

In an earlier statement Sunday, which followed a meeting between Mr. Kim and his top nuclear scientists, North Korea claimed it had already mastered the ability to mount a hydrogen bomb atop a long-range missile.

Mr. Kim was quoted as saying all of the components of its hydrogen bomb were homemade, insulating the nuclear-weapons program from sanctions and “enabling the country to produce powerful nuclear weapons, as many as it wants.” The bomb’s explosive power has a range up to hundreds of kilotons, the North Korean report said.

The claims couldn’t be immediately verified and the report didn’t specify the date of Mr. Kim’s visit. North Korea conducted a pair of nuclear tests last year, including one a year ago this week, that Pyongyang claimed involved hydrogen bombs.

North Korea’s September 2016 test had an estimated yield of about 10 kilotons, higher than in any of its previous four tests but likely too low to have come from a hydrogen bomb.

The Threat From North Korea’s Missiles

In photos published by North Korean state media before Sunday’s nuclear test, Mr. Kim gestured toward a bulbous silver device that appeared capable of holding the two nuclear devices that would be necessary for a thermonuclear blast.

A hydrogen bomb—technically known as a thermonuclear weapon—typically uses a smaller, primary atomic explosion to ignite a secondary, much larger blast. The first stage is based on nuclear fission—the splitting of atoms—and the second on nuclear fusion, which combines atoms, smashing them together and unleashing more energy. Additional stages can be added to increase its destructive force.

That makes the H-bomb more powerful than early nuclear weapons that typically used a single-stage blast based only on nuclear fission. Those weapons are known as “pure fission” devices and are thought to have been used in all of North Korea’s first three nuclear tests, which it said involved atomic bombs.

Sunday’s nuclear test came just before Chinese President Xi Jinping was set to give a speech at a summit of the five so-called Brics countries, including Brazil, Russia, India and South Africa, being held in the southern Chinese coastal city of Xiamen.

Zhao Tong, a fellow at the Carnegie-Tsinghua Center for Global Policy in Beijing, said North Korea may have chosen to conduct the nuclear test ahead of China’s leadership reshuffle set for next month, knowing Beijing will emphasize stability before the critical meeting.

“It appears North Korea wants to complete the final step toward perfect nuclear deterrence before the 19th party congress because China wants to prioritize stability ahead of it,” he said. The twice-a-decade Communist Party gathering is expected to start Oct. 18 in Beijing.

If North Korea has achieved the capability to test a thermonuclear weapon, it gives it a more “credible nuclear deterrence,” as it no longer needs very accurate missiles to hit its targets, he said. “That’s a real concern.” 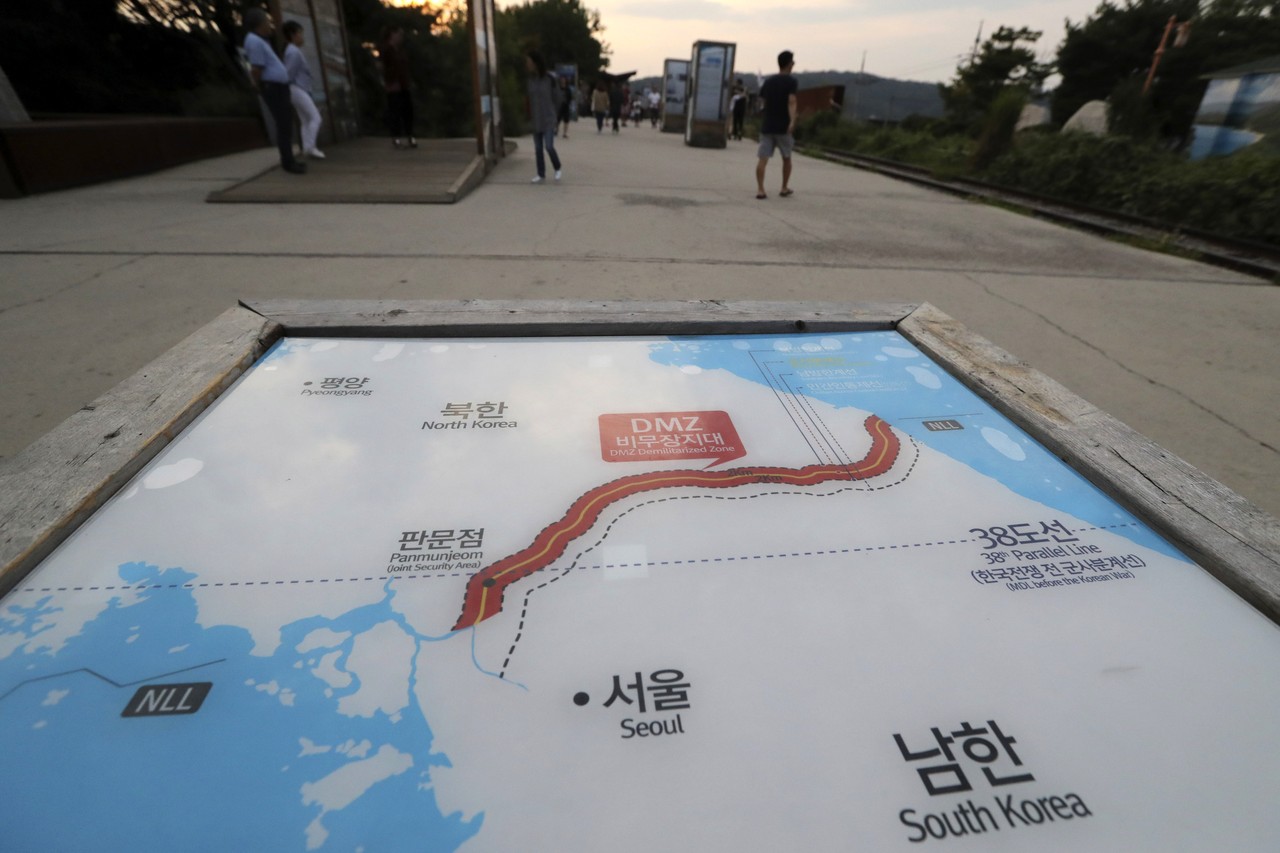 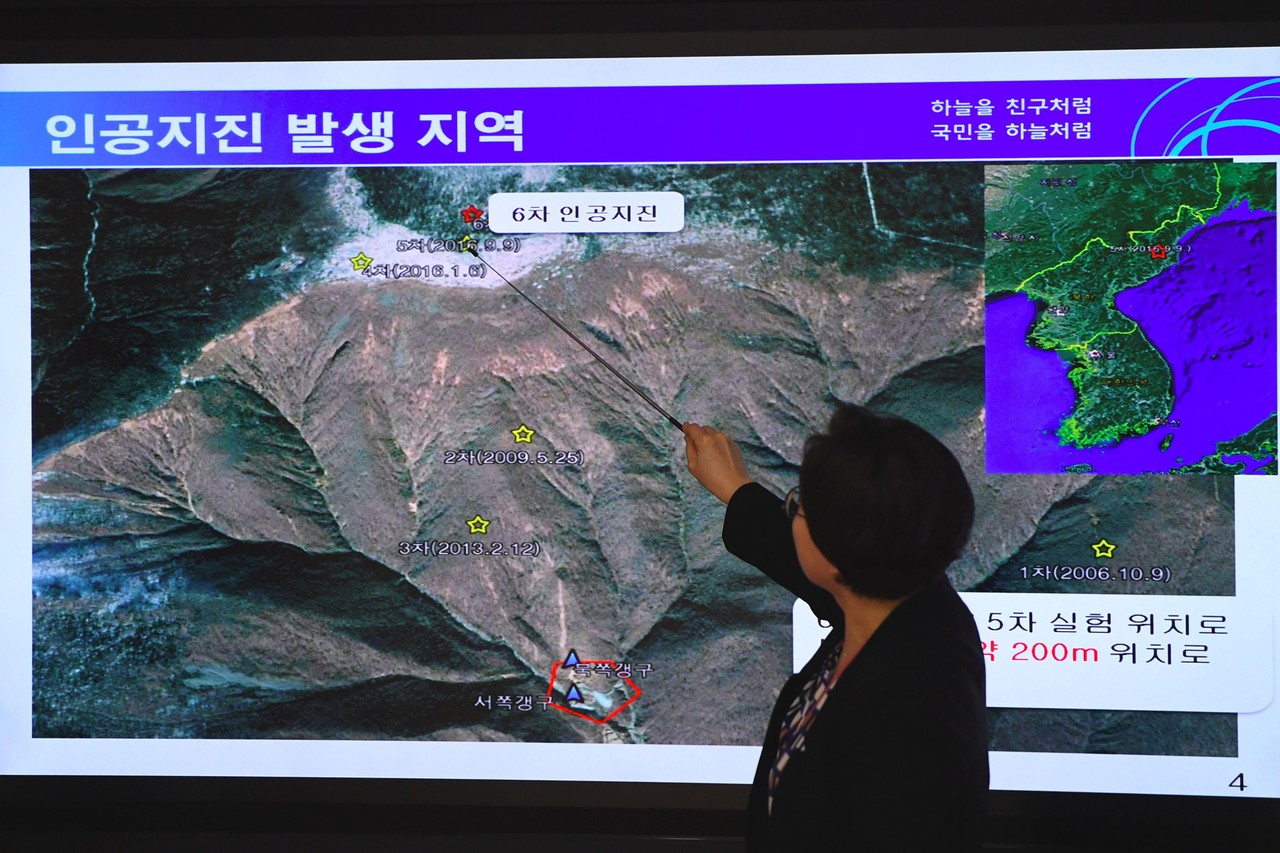 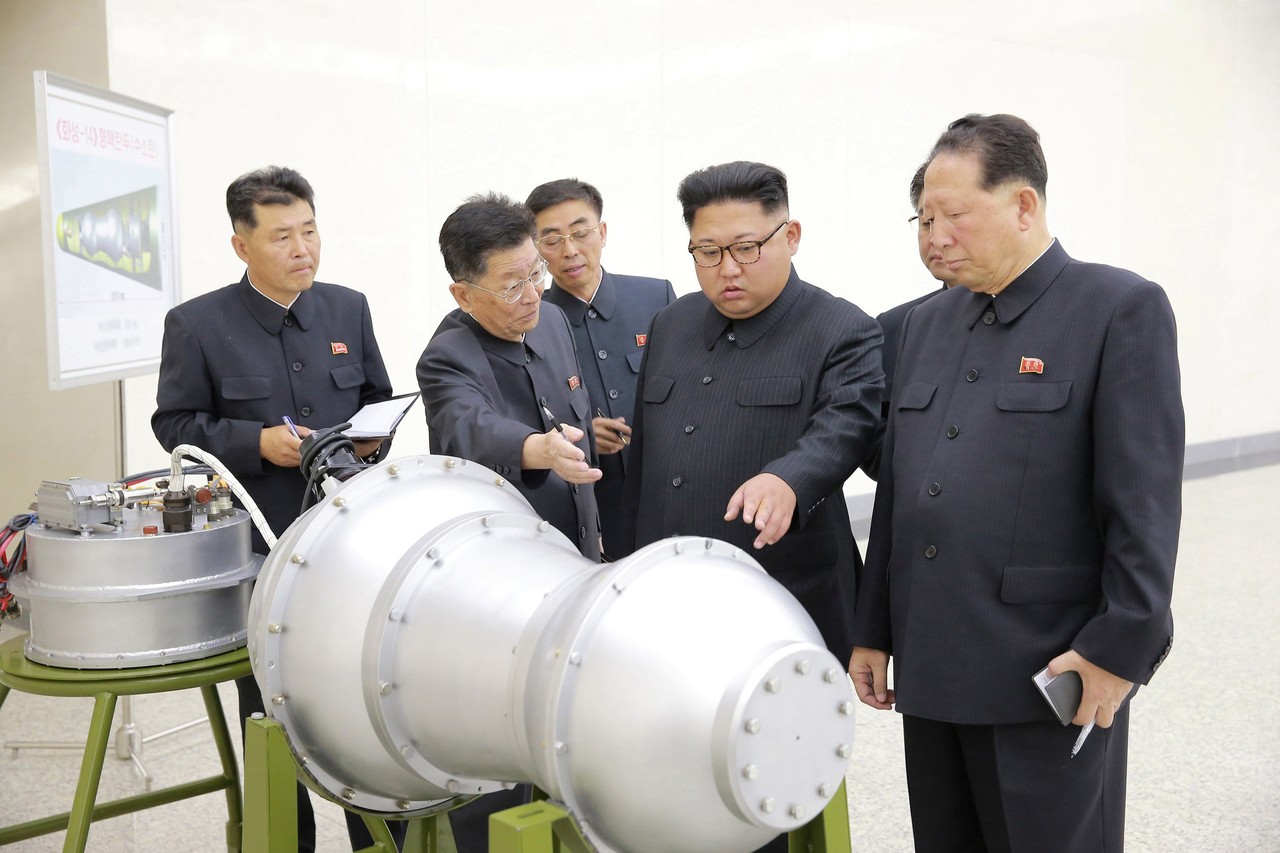 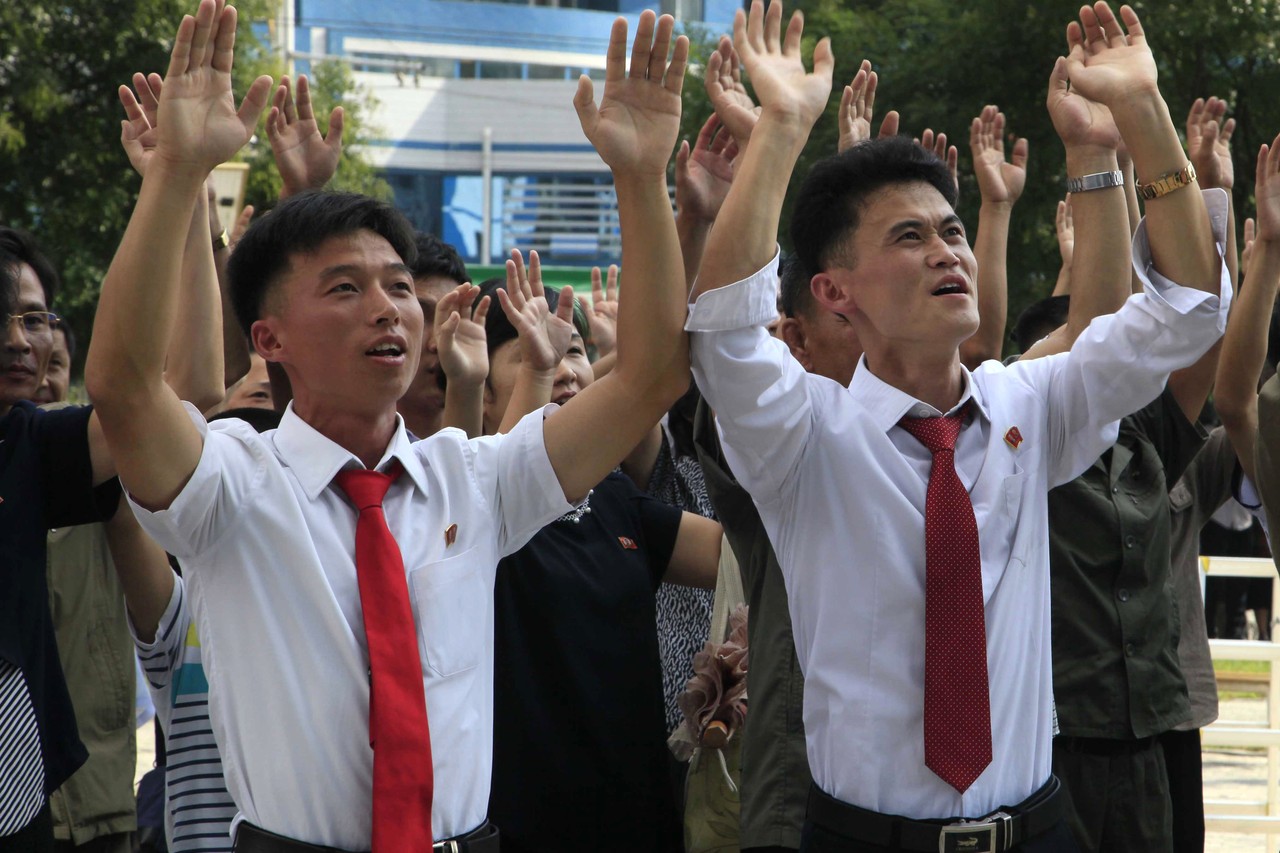 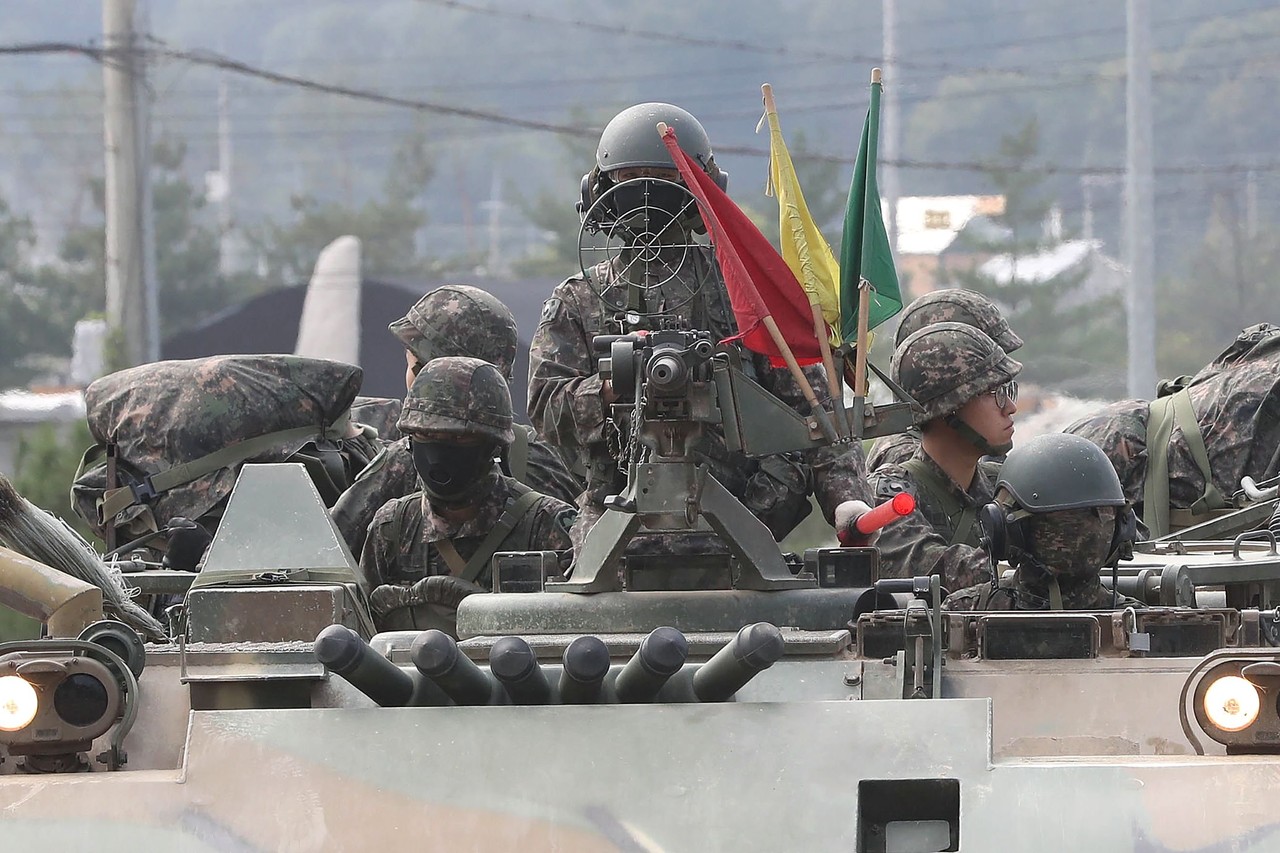 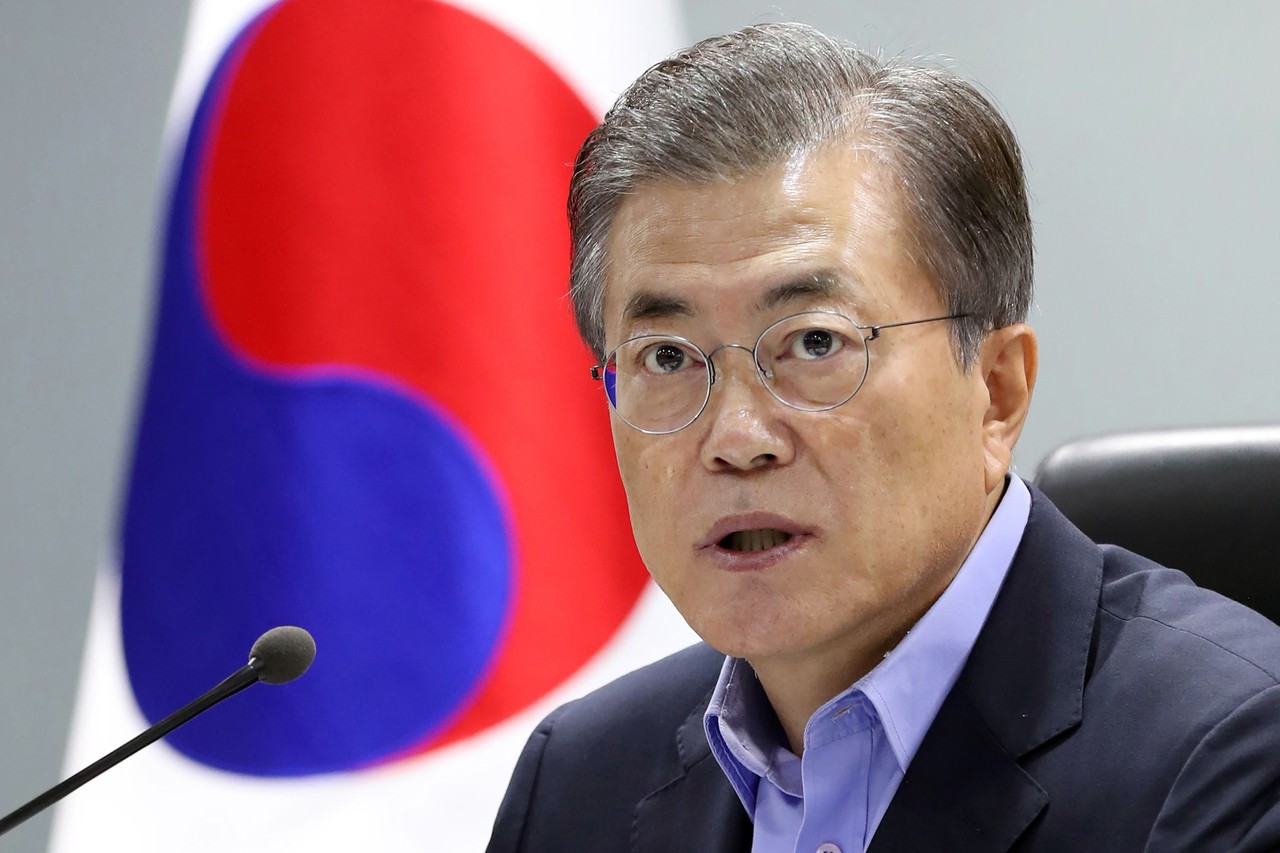 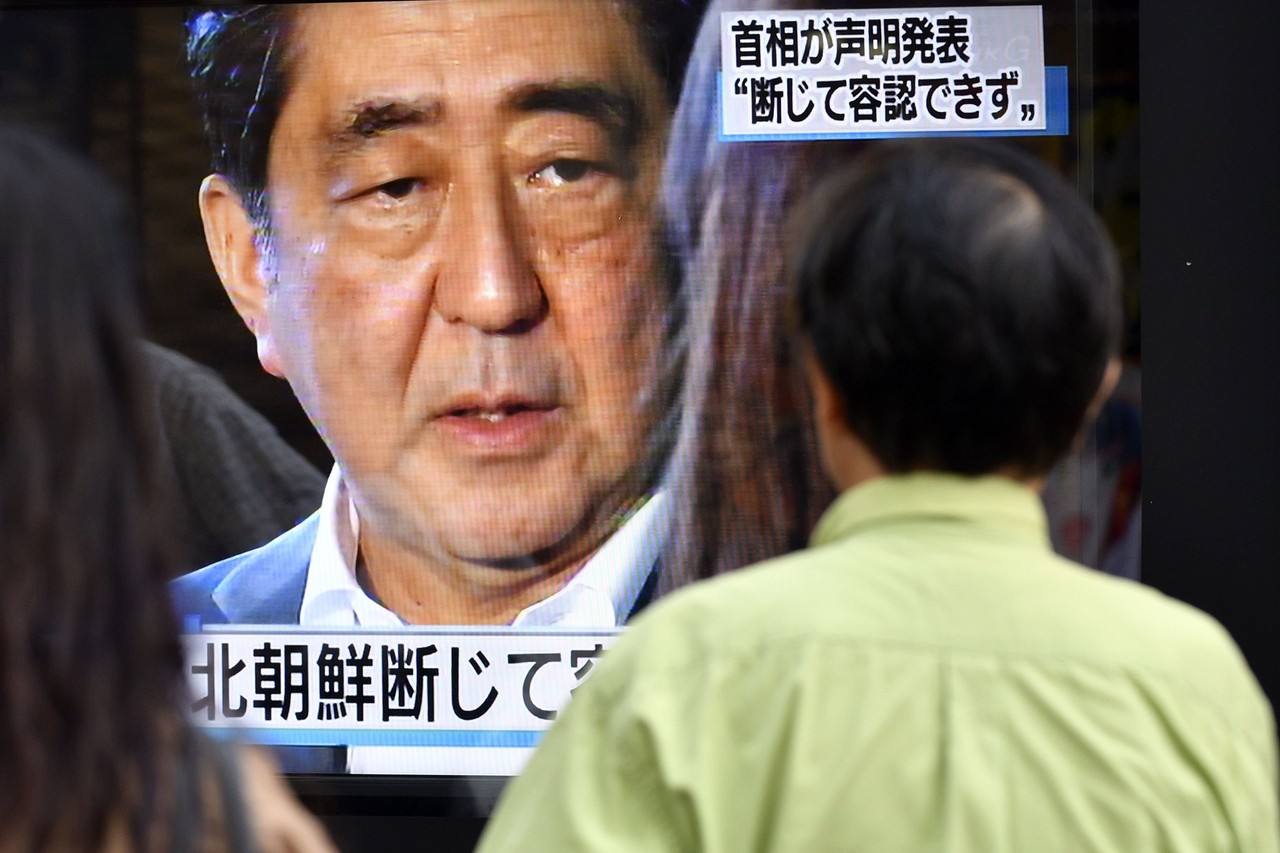 Lee Mi-Seon, a director of South Korea’s National Earthquake and Volcano Center, shows a map of a North Korean location during a briefing about the ‘artificial earthquake’ in North Korea, at the Korea Meteorological Administration in Seoul on Sunday. The ‘artificial quake’ in North Korea on Sunday, thought to be its sixth nuclear test, was five to six times more powerful than the tremor from Pyongyang’s fifth test, the weather agency said.
JUNG YEON-JE/AGENCE FRANCE-PRESSE/GETTY IMAGE
1 of 7
•••••

“We strongly urge the DPRK to face up to the firm will of the international society on the issue of denuclearization on the Korean Peninsula” and to return to “the track of dialogue,” the ministry said, referring to North Korea by the initials of its official name, the Democratic People’s Republic of Korea.

Japanese Prime Minister Shinzo Abe said his country would work together with the U.S., South Korea, China and Russia on a response to the nuclear test.

“We can never accept it. We will need to make a strong protest,” Mr. Abe said.

In North Korea’s statement before the nuclear test, Mr. Kim also threatened to detonate a nuclear device at a high altitude above the U.S. The detonation could emit a brief but powerful electromagnetic signal capable of disrupting swaths of the U.S. electrical grid, experts say.

Fears of such an electromagnetic pulse, or EMP, attack by North Korea have circulated for years among some U.S. policy makers, though others have openly dismissed the possibility that Pyongyang could launch such a strike.

—Kwanwoo Jun in Seoul, Eva Dou in Xiamen, China, Yang Jie in Beijing and Chieko Tsuneoka in Tokyo contributed to this article.