Muslims and ISIS supporters on Twitter celebrated the London tower fire that has claimed at least six lives so far, despite many of the residents of the tower being Muslims.

Greenfell Tower is located in Ladbroke Grove, an area of London populated mainly by poor ethnic minorities, many of them Muslims. Many of the affected families will be Muslim.

A fundraiser for the victims of the fire also begins with the Arabic greeting “Assalamu Alaikum” (which means “peace be upon you”).

However, this didn’t stop other Muslims and ISIS sympathizers gloating about the fire online.

Arab Twitter takes joy in the Grenfell Tower London fire while praying for lots of casualties. Nothing to do with Islam. 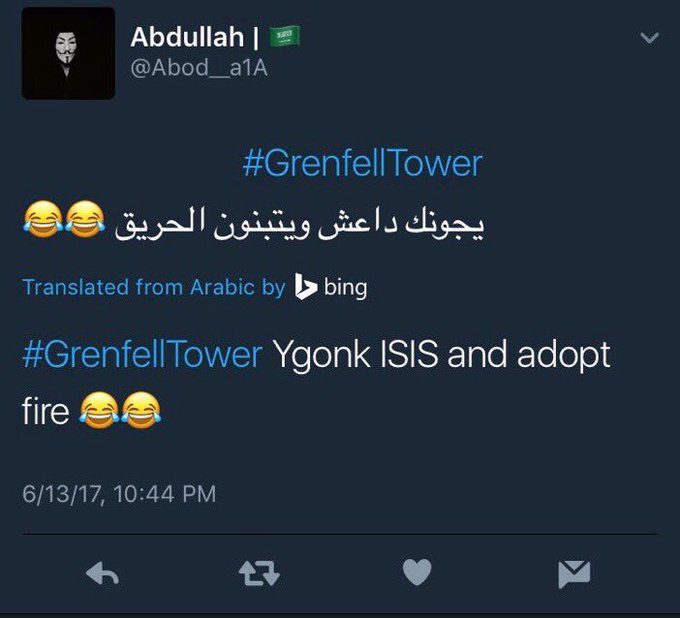 “I am very happy. Because this is what British troops do to Iraqis every day. Let them have a feel of the destruction today,” wrote Yusra Javaid.

“They bombed Iraq, Afghanistan so now this is their times,… Do not forget, everyone eat what he farmed,” added Soidicou Abdou Mari.

One commenter on Al-Jazeera even blamed Donald Trump.

“Hopefully not a set up by evil Trump and CIA to condemn even more the Mayor of London as a pre-text strategy to oust him,” wrote Ann Shah Ariffin.

“UK should repent, for all the minerals they stole from Africa and the world, and all the atrocities they committed during their so called colonial rule, karma takes her course,” added another.

“Maybe some of the CIA’s agency people are involved in setting building on fire. Because #Trump administration don’t like #MayorOfLondon Sadiq Khan being a Muslim mayor of Christian Society,” wrote Sohail Gem Wazir.

A man is even heard on the video below to say “Allah Akbar” – the refrain commonly shouted by Muslims during terror attacks – as victims are still trapped inside the building.

This reaction again disproves that myth that Islam is a “religion of peace”. Islam is obsessed with death and its most vocal adherents will celebrate death even when other Muslims are the victims.

Around 90% of the victims of Islamist terror attacks are other Muslims, underscoring how the belief system itself is fundamentally barbaric outside of the contribution of any other factors such as western foreign policy.