In a move that stunned many members of the media, on Thursday night Deputy Attorney General Rod Rosenstein, who is overseeing the Russia probe due to Jeff Sessions’ recusal and who earlier this week confirmed only he has authority to fire Special Counsel Robert Mueller, released an unorthodox statement to be “skeptical about anonymous allegations” following the relentless barrage of news reports emerging from the WaPo and the NYT about the evolving probe into Russia’s “election interference” and possible collusion with Trump, all based on “anonymous sources.”

“Americans should exercise caution before accepting as true any stories attributed to anonymous ‘officials,’ particularly when they do not identify the country — let alone the branch or agency of government — with which the alleged sources supposedly are affiliated. Americans should be skeptical about anonymous allegations. The Department of Justice has a long-established policy to neither confirm nor deny such allegations.

Rosenstein, who many had seen as a Trump foil at the DOJ, did not cite specific reports. The DOJ released Rosenstein’s statement after 9 p.m., shortly after The Washington Post reported that the special counsel was investigating the business dealings of Jared Kushner, Mr. Trump’s son-in-law and adviser. That report was attributed to unnamed American officials.

As we said, the media and punditry was “stunned” by the official statement: the NYT’ Maggie Haberman said “Have literally never seen a statement like this.” The new leader of the Trump “resistance”, Preet Bharara also chimed in, tweeting “Americans should also exercise caution before accepting as true lies about firing of FBI Director & defamation of a war hero special counsel” 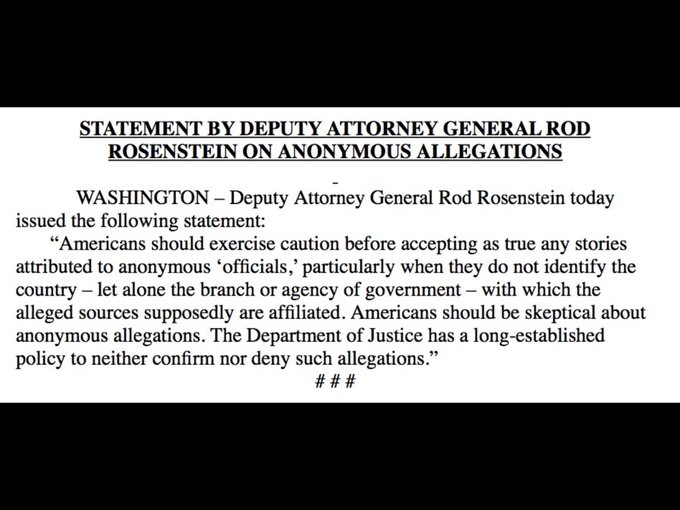 To be expected, Rosenstein – who the media was ambivalent about and following his recent testimony in which he said there was “no grounds” to fire Mueller, praised – promptly became the latest pariah for insinuating that the media’s Trump reportage may be, in fact, fake news.

As the NYT reported this morning, the “statement aligned with the president’s open frustration with unflattering leaks. Mr. Trump has called stories about the investigation “fake news” and complained on Twitter about a Washington Post report on Wednesday night that the special counsel, Robert S. Mueller III, was investigating the president himself for possible obstruction of justice. That story was also attributed to unnamed sources, as was a New York Times article that same evening about Mr. Mueller’s request for interviews with three top intelligence officials.”

What to make of Rosenstein’s statement?

On one hand, it could be seen as a validation of Trump’s repeated allegations that much of what has emerged in press in recent weeks is “fake news.” On the other, as some in the media suggested, it could be an attempt to “chill” communications and leaks to the press. Yet others saw this as a preview of what may be another upcoming story. As Bloomberg’s Jennifer Epstein who said “If this statement is preemptive: oh, boy, is the story going to be explosive.”

If this statement is preemptive: oh, boy, is the story about going to be explosive.

After 7 months of investigations & committee hearings about my “collusion with the Russians,” nobody has been able to show any proof. Sad!

He followed up by tweeting “The Fake News Media hates when I use what has turned out to be my very powerful Social Media – over 100 million people! I can go around them”

The Fake News Media hates when I use what has turned out to be my very powerful Social Media – over 100 million people! I can go around them

@realDonaldTrump ur the Prez of the free world — move on and lead please!!!!!!!!!