The attempted massacre of dozens of Republicans highlights the Democrats’ constant promotion of violence against their ideological opponents – rhetoric that has been espoused recently by Senator Tim Kaine and former Attorney General Loretta Lynch.Failed vice presidential candidate Kaine appeared on MSNBC in January urging Democrats to “fight in the streets” in resistance against the Trump agenda and the will of the American people.

“There’s so much going on here that we clearly see, you know, places where… we can criticize what the administration is doing, but how does the [Democratic] party rebuild?” asked host Mika Brzezinski. “How do you prevent a continuation of the bubble in a situation like this, and how does the party reclaim its reach across the country while fighting these battles?”

“So, the way we get outside the bubble is we take advantage of this tremendous public outcry against the administration,” responded Kaine. “What we’ve got to do is fight in Congress, fight in the courts, fight in the streets, fight online, fight at the ballot box, and now there’s the momentum to be able to do this.”

Kaine’s son, Linwood, apparently heeded his father’s advice and would later be arrested while attempting to disrupt a pro-Trump rally in Minnesota, and is now facing criminal charges.

“When protesters began harassing people gathered at the Minnesota State Capitol, rally participants attempted to block the entrance to the rotunda where the rally was taking place,” reported the Daily Caller. “Protesters then tried to force their way down the stairs, using smoke bombs, mace and fireworks, and causing a need for some rally participants to be treated by paramedics.”

“We love that our three children have their own views and concerns about current political issues,” said Kaine in a statement on the matter. “They fully understand the responsibility to express those concerns peacefully.”

Lynch also used similarly incendiary language in a bizarre one minute video in which she seemed to call upon fellow ‘progressives’ to march, bleed, and die in the streets – also in resistance to the Trump agenda, which has been endorsed and Constitutionally mandated by the American people.

“I know it’s a time of concern for people, who see our rights being assailed, being trampled on and even being rolled back,” she said. “I know that this is difficult, but I remind you that this has never been easy. We have always had to work to move this country forward to achieve the great ideals of our Founding Fathers.”

“It has been people, individuals who have banded together, ordinary people who simply saw what needed to be done and came together and supported those ideals who have made the difference.”

“They’ve marched, they’ve bled and yes, some of them died,” she continued. “This is hard. Every good thing is. We have done this before. We can do this again.”

These are only two examples out of a stunning collection of calls to violence and murder from the intolerant, unhinged leftists in the Democrat party, mainstream media, Hollywood, and the spiderweb of interwoven organizations and cabals like Antifa and Black Lives Matter who have effectively transformed into domestic terrorists in Trump’s America. 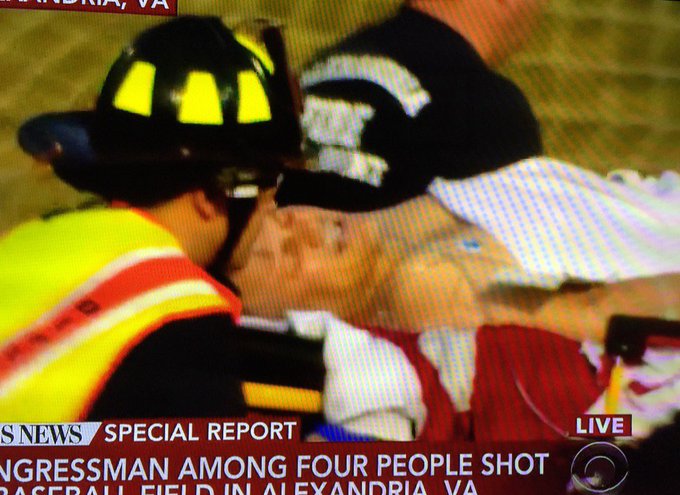 Majority whip Steve Scalise on a stretcher as he’s evacuated after shooting in Alexandria.

Today’s shooting of a top-ranking Republican Congressman by a homicidal leftist was inches from turning into a slaughter of unthinkable proportions, had it not been for a few brave Americans with guns – a God-given right Democrats work around the clock to take away.