A 33-year-old woman who works for a non-profit confronted Donald Trump’s press secretary Sean Spicer in an Apple store and unleashed a stream of questions at him, asking how it felt to “work for a fascist.”

Shree Chauhan streamed video of the encounter, and now she is criticizing Spicer for telling her “It’s such a great country that allows you to be here.” Chauhan is of Indian heritage.

In an interview with Heavy, Chauhan likened Spicer’s comment to a “dog whistle” and said she was driven to confront him in part by a photo of the Holocaust. On social media, reaction to Chauhan is mixed, with some praising her and others accusing her of harassing Spicer in the store.

Chauhan works as “the Founder and CEO of Parents in Partnership, an education startup organization that empowers parents to lead positive changes in schools and communities.”

She’s a former teacher from Florida who is the child of immigrants. Chauhan told Heavy in an interview, “I’m a former educator. I came to Washington, D.C. to address educational inequities in our nation’s schools.”

Here’s what you need to know:

1. In the Video, Chauhan Asked Spicer How It Felt to ‘Work for a Fascist’ & Says a Photo of Auschwitz Motivated Her

Spicer initially responded, “We have a great country” when Chauhan confronted him in the Washington D.C. Apple Store  and asked him how it felt to “work for a fascist.” It appeared like he was trying to ignore Chauhan, even keeping a smile on his face. However, she kept it up. You can watch the video above.

“How does it feel?” Chauhan asked in the video she streamed to Periscope and posted to Twitter. She wrote in the tweet that accompanied the video: “Asking @PressSec questions in Apple Store since he doesn’t like the press.” The confrontation occurred on March 11.

In the video, Chauhan continues:

“It’s such a great country that allows you to be here,” responded Spicer in a comment drawing him some criticism on Twitter.

Chauhan continued on. At one point in the video, Spicer talks to another man and again tries to ignore her.

“Thank you very much,” Spicer says to someone in the room.

Eventually, Spicer walks out of the store.

In a later post on Medium.com, Chauhan explained, “I realized what an enormous opportunity it was to get answers without the protections normally given to Mr. Spicer. I was honestly quite nervous and wanted to come up with more cogent questions but did not have time to do so.”

She told Heavy in an interview that she decided to confront Spicer and asked the questions she did because it “was reported last week that the transition team headed by Vice President Pence was alerted to the actions of General Flynn. Additionally, General Flynn retroactively registered as a lobbyist for a foreign government. It is my belief that most top Trump administration officials either colluded directly with Russia to undermine our free elections, or knew about the collusion. Mr. Spicer has been part of Mr. Trump’s inner circle. It is hard for me to believe that he knows nothing about Russia.”

She said she was motivated in part by a photo she saw of Auschwitz.

“Part of the spiraling descent into fascism is the normalization of it,” she told Heavy. “I recently saw a picture of folks taking a break from the horrors they were committing at Auschwitz. If we didn’t know any better, it would just look like a black and white photo of people laughing. But it was a picture of people laughing who were also committing genocide. What is interesting about fascism is that life does not stop completely, but things are changing. For me, confronting Mr. Spicer was a way to shake us out of the humdrum of life and acknowledge that the ‘subtle changes’ are in fact abnormal and a descent into fascism.”

She wasn’t sure at first that it was Spicer.

“I was very surprised to see Mr. Spicer in the store. I had to Google him again to make sure it was him in the flesh.”

2. Chauhan Describes Herself as a ‘Patriot’ & ‘Feminist’ & Is a Former 6th Grade English Teacher Who Works on Education Advocacy 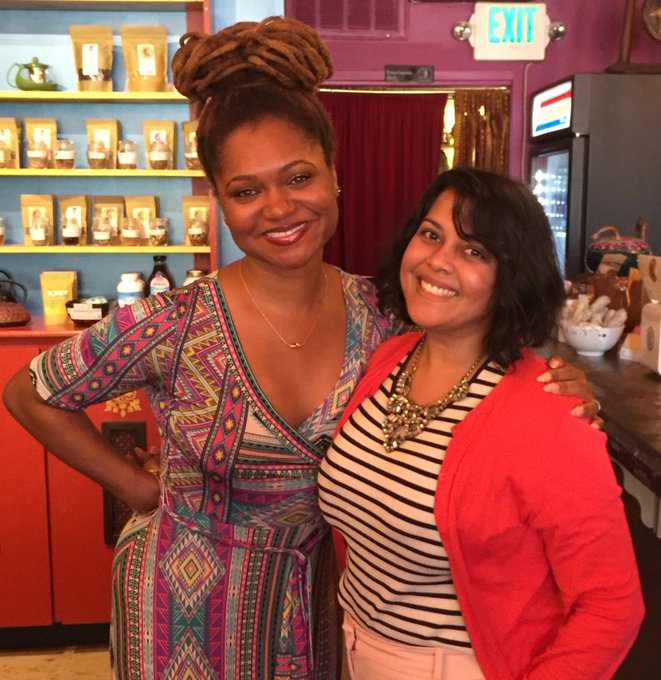 She was first identified as Shree Chauhan by the site ShareBlue.

A bio of Chauhan describes her as an “education thought leader with almost a decade of experience, Shree began her career as a 6th-grade English teacher in Miami-Dade public schools where she collaborated directly with parents and families to improve the academic outcomes and lives of her students. Her time in the classroom guides Shree’s vision for Parents in Partnership, and her current advocacy and policy efforts.” 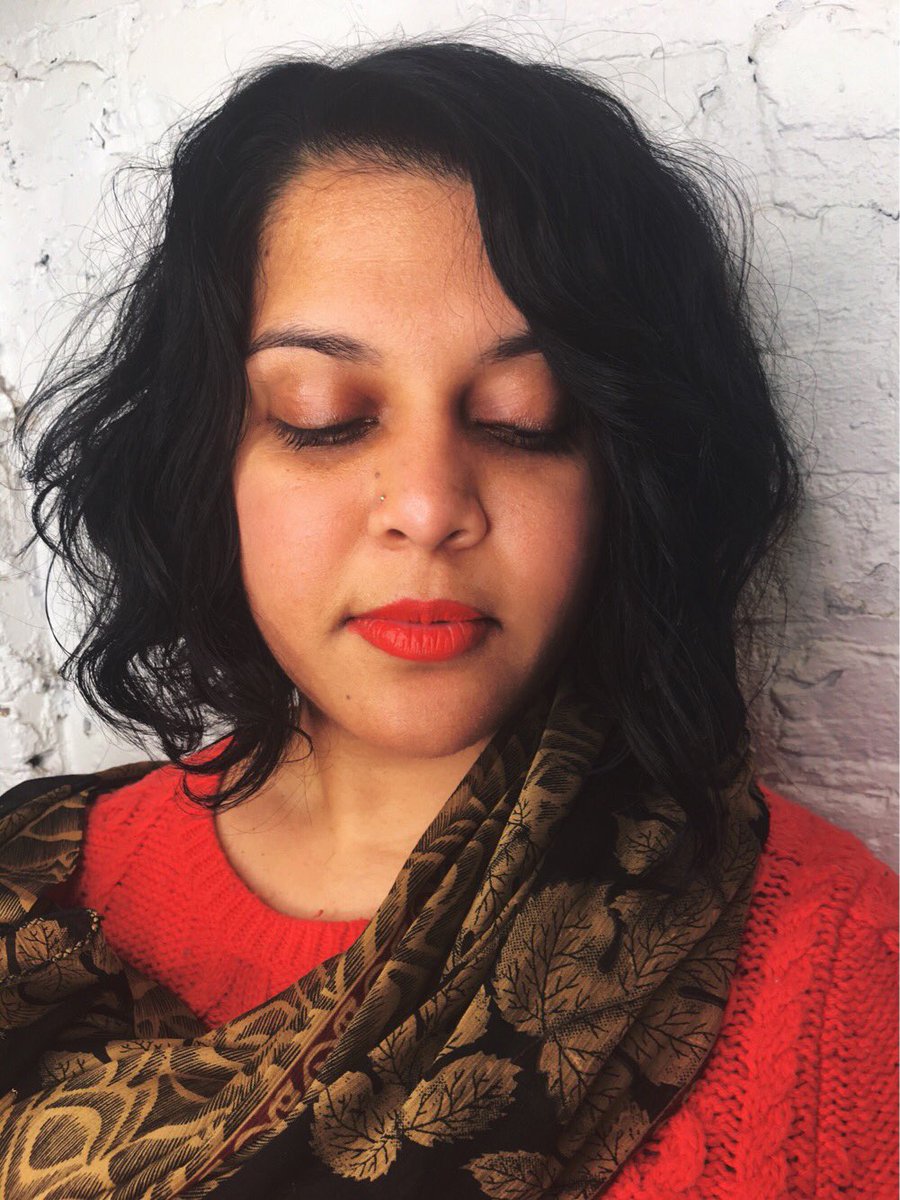 In a column on Medium.com, Chauhan explains, “From very early on, I knew that Donald J. Trump was dangerous for America and had fascist tendencies. His views on people of color, immigrants and Muslims are abhorrent. His actions against women are despicable. His willful disregard for our Constitutional rights is well, fascist.”
Teach for America reports of Chauhan: “Shree worked for the U.S. Department of Education, in the Office of Planning, Evaluation and Policy Development where she counseled senior leaders, including the Assistant Secretary Martin and Secretary Duncan. She went on to serve in the U.S. Senate for Senators Tom Harkin (D-IA) and Michael Bennet (D-CO) advising on education issues.”

The education bio says she guided policy efforts for the Data Quality Campaign.

Chauhan told Heavy she “grew up going to public schools and got a great education. I think every child in this country deserves a great public education too! Education is a the great equalizer in our society and I hope that I can make a dent in making it more equitable and excellent for kids.”

She added, “As a child of immigrants, my parents instilled the importance of education very early. But my family didn’t necessarily know how to navigate the American system of education. And their struggle is part of the inspiration for my organization, Parents in Partnership (PiP). PiP provides personalized support for low-income families at home, so they can support learning at home, connect better with their children’s teachers and finally lead change from the bottom up.”

4. Some Are Criticizing Spicer’s Comment to Chauhan but Others Say Chauhan Should Have Left Spicer Alone

ShareBlue asked Chauhan, whom the site says is of Indian descent, “how she interpreted Spicer’s remark — whether ‘be here’ was in reference to her being in the Apple Store or being in the United States — she confirmed that she felt he meant allowed her to be in this country.”

She told Heavy she considers it a “dog whistle.”

“In our culture, people use language that is meant to harm a specific group–we refer to that language as dog whistles. The administration is particularly fond of dog whistles like ‘inner city’, ‘thug’, etc. The language Mr. Spicer utilized with me was an example of a dog whistle. I recognize how heavy a charge it is to accuse the Press Secretary of the United States of racism. But I cannot see it any other way. Mr. Spicer deals with folks yelling questions at him for a living. He understands the power of language.”

She said she believes he used the phrase because she is not white.

5. Chauhan Was Involved in Organizing the Blocking of Betsy DeVos From a D.C. School & Was Born in Florida

Betsy DeVos, President-elect Donald Trump’s pick to be the next Secretary of Education. (Getty)

Chauhan’s bio says she “earned her Bachelor of Science degree in Communications from the University of Miami and a Master of Public Administration degree from American University. She is a native Floridian and a proud Washingtonian.”

In an interview, Chauhan told Heavy, “I was not at the Betsy DeVos blockade but I helped organize this action with the support of families and other community organization including the Black Youth Project 100. The families from this school were not informed of Ms. DeVos visit and did not want learning disrupted. The action was specific to that request and keep the chaos away from the learning environment.”

She added, “Like with my encounter with Mr. Spicer, initially some folks were not happy with the optics of confronting Ms. DeVos in this way. It was clear to families and other community members that the purpose of Ms. DeVos’ visit to Jefferson Academy was not to learn, but to use Black children to move policies that will actually harm children. Ms. DeVos did not get her photo op and went on to criticize the teachers from that school. In the weeks following the protest, it has become increasingly clear that Mr. Trump and his administration are seeking photo opportunities to make their terrible policies for children, families and marginalized communities more palatable. That is why they forced a photo with HBCU presidents and then later in a school in Florida to promote vouchers. Ms. DeVos is woefully unqualified for her role and has a dismal track record that has been criticized by some of the most avid supporters of school choice. My organization PiP will continue to hold her accountable.”

Chauhan is also involved in the National Urban League. Its site says of her: “At the Urban League, Ms. Chauhan connects her classroom experience to help lead the movement’s policy work in education and health. She conducts legislative research and analyses, develops policy recommendations.”