What could possibly go wrong?

There is an unknowable number of jihad terrorists among these refugees. It is only a matter of time before we hear from more of them.

More than 99 percent of those refugees are Muslims, reflecting the religious makeup of Somalia’s population, which is almost entirely Muslim, predominantly Sunni.

Figures for November are not yet available. The State Department’s Refugee Processing Center database was down on Monday – but between the al-Qaeda terror attacks in September 2001 and October 31 this year, 98,799 Somali refugees had been resettled in the U.S.

The largest numbers of Somali refugees arriving in the country since 9/11 have been settled in Minnesota (almost 16,000) and Ohio (more than 7,500), with sizeable communities also in Texas, New York and Arizona.

Monday’s attack on the Ohio State University campus in Columbus, Ohio, was carried out by a student who, according to law enforcement officials, was a Somali refugee who came to the U.S. in 2014, after living for several years in Pakistan.

Abdul Razak Ali Artan drove his car into pedestrians before getting out and stabbing people with a butcher knife, injuring eleven people in total. A police officer shot and killed him.

The terror attack comes two months after a 20-year-old college student – the U.S.-raised son of refugees from Somalia – stabbed 10 people at a Minnesota shopping mall before an off-duty police officer shot and killed him.

In a campaign stop in Minnesota shortly before the November 8 election, Republican nominee Donald Trump pointed to the mall attack and accused the administration of “faulty refugee vetting.”

During October alone, 1,352 Somali refugees were admitted to the U.S., where they were resettled in 38 states and the District of Columbia. The biggest groups were located in New York State (138), Minnesota (135) and Ohio (93).

Those 1,352 Somali refugees constituted 13.5 percent of the total number of refugees from around the world (9,945) admitted to the U.S. in October. They were also second largest group from any country admitted that month, behind a 2,081-strong contingent from the Democratic Republican of the Congo. 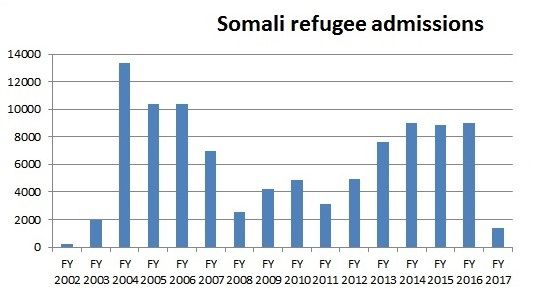 The 9,020 Somali refugees admitted during FY 2016, which ended on September 30, comprised the largest annual admission of Somalis under the refugee program in a decade. Not since 2006 (10,357) has a larger group arrived.

For more than 20 years Somalia was not under the control of a single national government. The eventual establishment of a central federal government in 2012 has brought neither stability nor an end to the terrorist offensive waged by al-Shabaab, an al-Qaeda affiliate.

Al-Shabaab’s deadly campaign at home has had a spillover in the Somali-American community. Over nearly a decade the FBI has recorded cases of several dozen young Somali-American men from Minneapolis-Saint Paul having traveled to Somalia to join the terrorist group.

Last year nine young Somali-Americans were arrested on suspicion of plotting to join the Islamic State of Iraq and Syria (ISIS/ISIL). Six of them pleaded guilty and the other three were later convicted of plotting to join ISIS and commit murder abroad.

Over recent months ISIS has called on supporters around the world to carry out “lone wolf” attacks in their home countries….