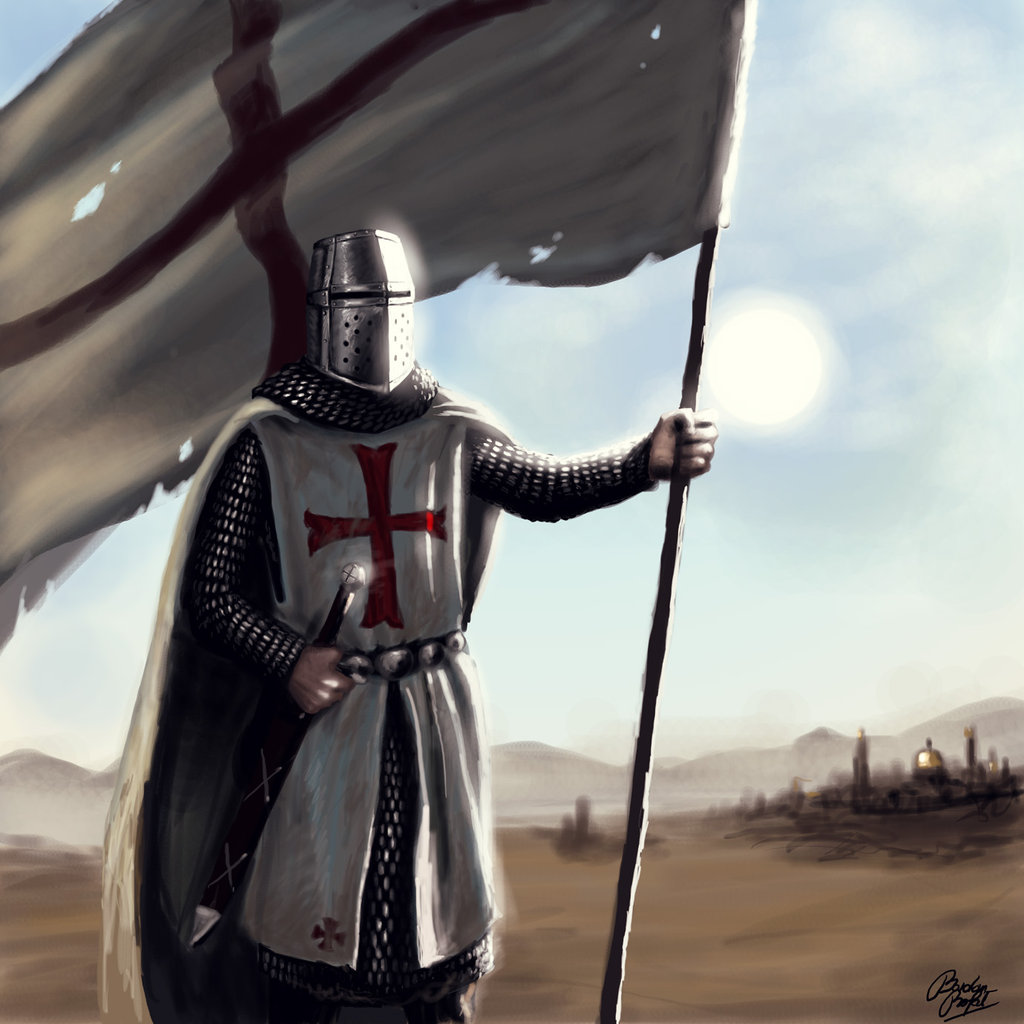 Onward Christian soldiers, marching as to war
With the cross of Jesus going on before
Onward then, ye people, join our happy throng
Blend with ours your voices in a triumph song

Christ, the Royal Master, leads against the foe
Forward into battle, see His banners go…

The warriors of radical Islam wish to destroy us. Anyone not murdered by them must succumb to Sharia Law and their twisted ideology. They will not stop until we are dead or under their control.

The West has only one choice, to fight and vanquish the soldiers of radical Islam once and for all, before the Judeo-Christian world is conquered, a goal of Islam for centuries.

Christianity’s fight with Islam has been going on since 1095 A.D. and the launch of the First Crusade. For the next 400 years, the soldiers of Christ would battle the warriors of Islam for control of Christian sites and territories in the Middle East.

The Crusades led to the rise of the Eastern Orthodox Christianity and its eventual bulwark against Islam in the East.

Under assault from both Muslims and Western Christians, Eastern orthodox populations almost disappeared from the heart of their culture, around Constantinople and in the Eastern Balkan countries.

The remnants of Orthodox Christianity are now centered in the Slavic regions of Eastern Europe.

After 300 years of Rome persecuting Christians, during the 4th-Century AD, Emperors Constantine and Theodosius saw the advantage in allying with their adversaries, made Christianity the Roman state religion, and forbade the worship of ancient pagan gods.

Over the next 1,100 years, as the Roman Empire in the West was overwhelmed by barbarians, the people of Turkistan—who had a long history of conquest and defeat, back and forth, with China, Mongolia, Europe, Persia, Mesopotamia, and Egypt—accepted the Islamic religion. They formed an alliance with other Arabs and Muslims, defeated, and then ruled, much of the Byzantine (Eastern) half of the “Holy Roman Empire.” This was the Islamic/Ottoman (Turkish) empire, which reached its zenith under the rule of Suleiman the Magnificent in 1550 AD.

By the 8th-Century, just 100 years after the death of Mohammed, the Arabs had converted most of North Africa to the Muslim faith, crossed the Straits of Gibraltar, and overran Spain. They then entered France, but were decisively defeated by the Christians at the Battle of Tours (Poitiers) in 732 AD. For 700 years, from the 8th-to the 15th-Century, the Spanish Christians slowly pushed the Muslims back and, during the reign of Queen Isabella in 1492, the same year Columbus reached the Americas, they drove the Muslims off the peninsula.

As the center of gravity of the Western world shifted from the Mediterranean to the Atlantic seaboard, a series of defeats marked the turning point of Islamic/Ottoman fortunes in the East. The first came in 1571 when, in a three-hour battle, a Christian fleet composed of 208 Venetian, Spanish, Genoese, and papal galleys destroyed 90% of the Ottoman fleet of 260 ships in Greece’s Bay of Lepanto.

For the next 100 years, the Turks tried to regain their momentum and expand deeper into Europe. But they suffered a horrendous defeat in 1683 trying to take Vienna and, weakened by that setback, lost several other cities, including Athens, to the Christians. At this time Russia, under Peter the Great, joined the Holy Alliance against the Turks. The inexorable crushing of the Islamic/Ottoman Empire by the Christian Empire had begun.

The battles between Christians and Muslims ebbed and flowed for another 100 years, and as America won its freedom and the French their revolution, the Muslim Empire steadily gave ground. By the middle of the 19th-Century, the collapse of the Ottoman Empire was imminent, and European powers started positioning themselves to claim the spoils. France sought to maintain influence in Jerusalem, Egypt, Algeria, and later Tunisia. Her building of the Suez Canal (1859-1869) conflicted with Britain’s plans to control the land and sea routes to Asia.

At the end of World War I, the boundaries of the Islamic World were redrawn by the victorious Allied nations. A perfect example of this is the creation of Kuwait by the British, which in fact, was the 19th Province of Iraq. The West gradually began to manipulate the Middle East for its oil supply. Puppet governments were installed across the region.

The Arabs and the Persians and those in Muslim nations in Africa, already had a religious hatred of the Christian world. Now, they resented the West for its economic and political exploitation of their nations.

After World War II, the nation of Israel was created in 1948, adding even more tension to the volatile region. Modern day Islamic terrorism was born and the 1,000 year fight with Christianity would see a new chapter.

In 1972, the Palestinian Liberation Organization, the PLO, took Israeli athletes hostage at the Olympic Village in Munich, West Germany. Because of their past, the Germans were hesitant to take any firm military action. The Israeli athletes were all murdered by the PLO.

In 1979, radical Muslims in Iran overthrew the Shah, the pro-Western leader and installed the current radical Shiite government in power today. The US Embassy was overrun by students and 60 Americans were taken hostage. The crisis continued for 444 days, until Ronald Reagan took the oath of office in January of 1981, leading the fearful Iranians to free the Americans.

In 1983, Iranian sponsored terrorists from the “Islamic Jihad,” a front group for Hezbollah murdered 229 US Marines and French soldiers at Beirut Airport with two massive truck bombs.

Since 9-11, which was the biggest event in the fight with Islam since the Turks were thrown back at the gates of Vienna, the West has been in a continual fight with the PLO, Hezbollah, Al-Qaeda and now, ISIS.

ISIS controls an area the size of Indiana in Syria and Iraq. Their agents of destruction are in place in Europe and North America. With the migrant invasion, of Western Europe, a massive Fifth Column will be in place to move into action against the Christian nations of Germany, Austria, Sweden and France.

A final battle is brewing with radical Islam across the free world, from Jerusalem to the Vatican, Berlin, London and to New York.

If the feckless leaders of the Western world don’t take harsh steps against the migrants and amp up the fight with ISIS, the Christian world will soon be living under Sharia Law.

We need a modern day Holy Alliance; including the nations of Western and Eastern Europe, Russia, the UK, the US, Canada and Australia.

To fight this war we must first throw away the shackles of political correctness. This must be a Crusade, the Judeo-Christian world must be on a crusade to destroy the warriors of radical Islam. It can’t be a police action, a legal case, a skirmish, an incident. It is a military campaign, a Final Crusade to end the threat of ISIS and Al-Qaeda and Hezbollah and the nation states like Iran that sponsor them.

The warriors of radical Islam must be destroyed once and for all.