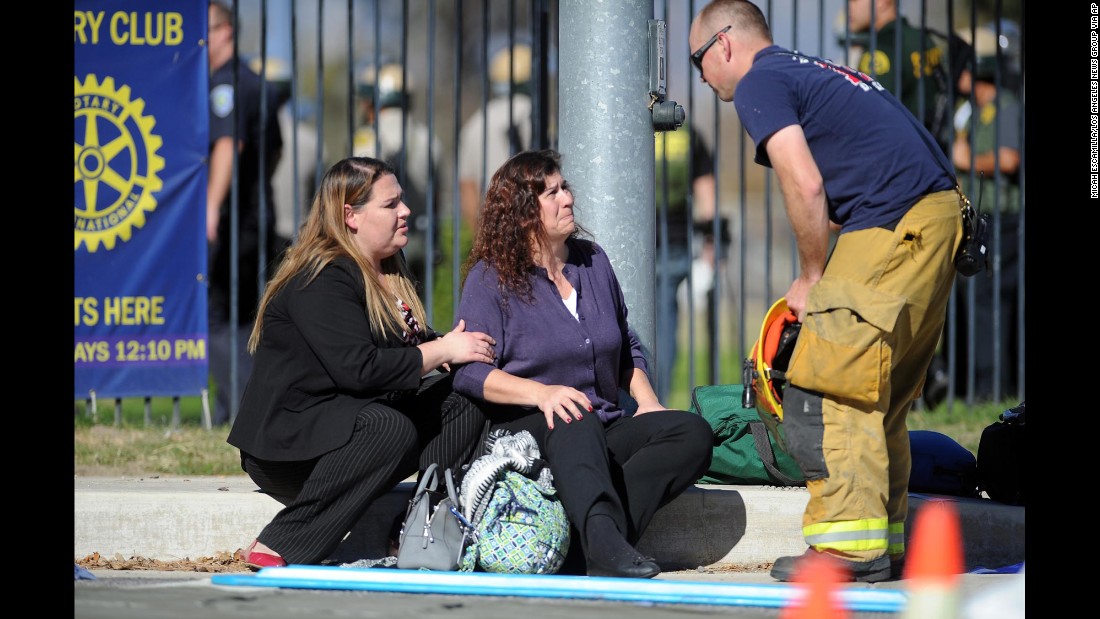 Today, America was struck by another mass shooting. But, this one was different. At least two armed shooters entered the Inland Regional Center in San Bernardino, California, and opened fire on people attending a Christmas party there. The shooters were armed with AR-15’s, dressed in military gear and wore masks. Before the shooting was finished, 14 people were dead and another 18 wounded. An explosive device was also left in the center by the shooters.

Reports of the attackers fleeing in a black SUV inundated the media this afternoon, culminating in a shootout with a man and woman inside the vehicle who died in a hail of gunfire, on San Bernardino’s Tippecanoe Avenue. As the police cleared the vehicle of bodies and potential explosives, another suspect was in custody and as of now, another suspect is on the loose.

Meanwhile, the FBI, which has taken over the investigation, is raiding the home of one of the suspects, identified as Syed Farook, a health inspector with San Bernardino County. As of now, the FBI is attempting to disarm an explosive device at Farook’s home. The media is also reporting that the dead female suspect is Tashfeen Malik.

Immediately, speculation began concerning the motivations and actions of the shooters. At first, it was believed that there was only one shooter and that it may have been a workplace violence incident. Then there were reports of two or three shooters wearing military gear and carrying semi-automatic rifles. The idea of domestic terrorism was largely thrown out after the site was identified as a county building. As police arrived to the scene, the shooters were gone and on the move. While time ticked by, speculation grew to where they could possibly have gone: east to Vegas, west to Los Angeles, south to Mexico; the choices were endless.

Yet, they were only a mile from the scene of the shooting and reportedly went back to Farook’s apartment. Meaning…that they probably intended to stay and shoot it out and go down with the ship, when they could have easily had a two hour jump on the police and federal authorities. It is also possible they stayed in San Bernardino to conduct another attack, which for one reason or another was called off.

Rumors abounded of someone going to the center, arguing with an employee then returning with two other shooters and enough military gear to outfit BA Baracus and the A-Team.

While that is theoretically possible, what does add up is that this could be terrorism.

Here are some of the reasons today’s attack might be the work of an ISIS cell:

One of the dead shooters has been identified as Syed Farook. Neighbors have reported seeing three or four other Middle Eastern men living in Farook’s apartment lately. Neighbors also report that a multitude of packages were constantly arriving at Farook’s place. The three or four guys living with Farook were also reported to have been spending some late nights in a garage.

The FBI has taken over the investigation.

The victims at the Inland Regional Center were numerous, soft terrorist targets. It fits the modus operandi of ISIS to kill a large number of people in a public area.

A pipe bomb was found in the center, a classic Middle Eastern terror weapon. Also bits and pieces of future explosive devices were found in the bullet riddled SUV.

The shooters competently returned fire from a moving vehicle, a tactic that takes experience to learn. This is a tactic that is taught to professionals like FBI and Secret Service agents and undoubtedly to the bad guys as well.

This appears to be a highly coordinated, precision operation from the first moment, perhaps to the last. While the shootout looked like a last minute desperate act by the shooters, it may have been their plan from the beginning to fight it out with the police.

There is a remote chance of today’s actions having another motivation, but everything seems to point to ISIS or another radical Islamic group.

Within an hour of hearing about the shooting, he was back to beating the gun control drum.

When is the President of the United States going to come on board and lead the charge against radical Islamic terrorism?

Will President Obama ever understand the threat to his nation from ISIS?

ISIS, Obama, Ray Starmann
5 comments on “Was it ISIS?”