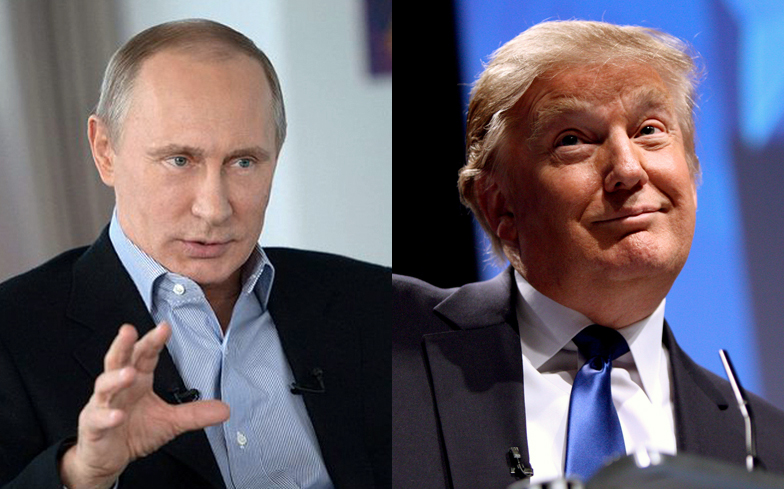 Donald Trump was on fire this week, stating that he would kill families of terrorists, a statement that caused Wolf Blitzer to choke on his beard and was even more inflammatory than last week’s “stop all Muslims from coming into the country line.”

Just as Reagan made statements that horrified the left about how he would destroy the Soviet Union, Trump horrifies the liberal media by stating how he would shut down immigration for Muslims and furthermore, would take out the families of terrorists.

Trump is the voice of the times. He represents every frustrated feeling Americans have now on everything from fighting ISIS to the economy to unrestricted illegal immigration.

Trump is a master of the PR game. The more bombastic his statements, the more non – PC his speeches, the more right-wing and patriotic his shredding of the press, the higher his poll numbers go.

Jeb! can’t figure it all out. He always looks like he’s thinking, “Who let this man into the grill room of the club?” Trump has money, like the people Jeb plays Round Robin tennis with at the club, but the Donald is that greatest of all social faux pas’, the nouveau riche guy, who instead of just nosing his way into club membership and the course with loud pants, is now infiltrating the GOP. Heavens no! Trump is like Rodney Dangerfield in Caddyshack, walking through the dining room, throwing cash at the band and making comments which drive the Republican establishment crazy and cause George Will’s glasses to fog up.

Jeb doesn’t even know how he is being beaten. He smiles at Trump like a 80 year old librarian stamping your copy of Henry Miller’s, Tropic of Cancer. He seems just horrified that Trump wants to actually take the fight to ISIS, like Reagan took the fight to the Russians and flayed them alive.

With Trump as President, have no doubt, ISIS will be vanquished.

Because Jeb is the true GOP candidate representing the establishment, he is the most offended by Trump. Cruz, Rubio, Carly and Christie laugh it all off. Carson just gives Trump that smile and probably dreams of both of them singing Ebony and Ivory at the GOP convention podium as 10,000 balloons drop.

Kasich reminds me of a frog in a blender on a permanent setting of marinate. I don’t even know if Kasich realizes that other candidates are actually up on the stage with him. What the heck is wrong with that guy?

Paul, no comment: his dad is a legend, so the son gets a pass. Knocking Rand is like knocking Fredo Corleone, which you wouldn’t do, in deference to Don Vito.

There’s one man who loves Trump. That man is Vladimir Putin.

Putin must have been watching the GOP debate this week in between channel surfing between WWE wrestling and Jonny Quest reruns. Putin stated that Trump, “Is a bright and talented person without any doubt,” adding that Trump is “an outstanding and talented personality.”

Trump, responded by saying, “It was a “great honor” to be complimented by “highly respected” Russian President Vladimir Putin.

“It is always a great honor to be so nicely complimented by a man so highly respected within his own country and beyond,” the GOP presidential front-runner told supporters at a rally in Columbus, Ohio.

“I have always felt that Russia and the United States should be able to work well with each other towards defeating terrorism and restoring world peace, not to mention trade and all of the other benefits derived from mutual respect,” he added.

Frankly, I think Trump and Putin would get along well. Trump would invite Putin to the White House, which in a Trump presidency would be decorated like a gold and silver Christmas ornament. Putin and Trump would realize that each guy while full of it, is not full of it.

The Ukraine, the Baltic States, Syria, Iran, ISIS, the Artic, it would all be worked out. Trump would be serving Putin deals on everything, along with the Beluga caviar and Dom Perignon champagne.

The next day, the two would hit the weight room, toss a medicine ball around, do some fencing, play some electronic football; everything Putin has wanted to do with Barry, but has been brushed off by the Kenyan constitutional scholar.

Putin’s first trip to the US would end with a Trump White House gift bag complete with a Trump Towers snow globe, a guarantee not to bother him in the Ukraine, in exchange for help to blow ISIS off the planet and the complete Star Wars set in Blue Ray. Trump might even throw in a Jedi light saber for Vlad to practice with on the long ride home.

There would be handshakes, high fives, low fives and maybe that old WWII vet half hug, with some promises to visit Vlad in Moscow where a little pick up hockey would be in order.

Yes, there is a Bromance out there just waiting to happen.