By Steve Quayle and the NY Times 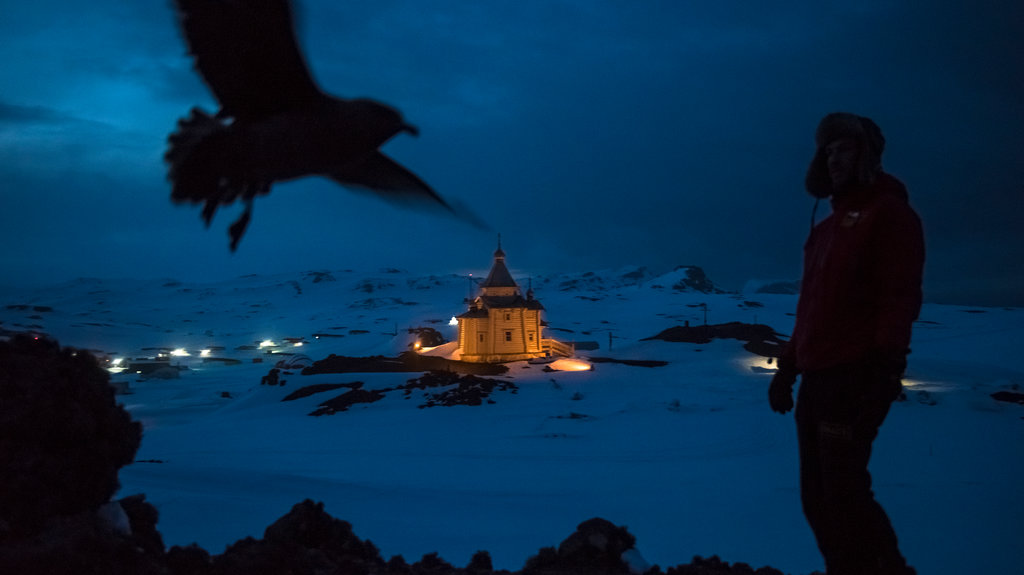 On a glacier-filled island with fjords and elephant seals, Russia has built Antarctica’s first Orthodox church on a hill overlooking its research base, transporting the logs all the way from Siberia.

Less than an hour away by snowmobile, Chinese laborers have updated the Great Wall Station, a linchpin in China’s plan to operate five bases on Antarctica, complete with an indoor badminton court, domes to protect satellite stations and sleeping quarters for 150 people.

Not to be outdone, India’s futuristic new Bharathi base, built on stilts using 134 interlocking shipping containers, resembles a spaceship. Turkey and Iran have announced plans to build bases, too.

More than a century has passed since explorers raced to plant their flags at the bottom of the world, and for decades to come this continent is supposed to be protected as a scientific preserve, shielded from intrusions like military activities and mining.

But an array of countries are rushing to assert greater influence here, with an eye not just toward the day those protective treaties expire, but also for the strategic and commercial opportunities that exist right now.

“The newer players are stepping into what they view as a treasure house of resources,” said Anne-Marie Brady, a scholar at New Zealand’s University of Canterbury who specializes in Antarctic politics.

Some of the ventures focus on the Antarctic resources that are already up for grabs, like abundant sea life. China and South Korea, both of which operate state-of-the-art bases here, are ramping up their fishing of krill, the shrimplike crustaceans found in abundance in the Southern Ocean, while Russia recently thwarted efforts to create one of the world’s largest ocean sanctuaries here.

Some scientists are examining the potential for harvesting icebergs from Antarctica, which is estimated to have the biggest reserves of fresh water on the planet. Nations are also pressing ahead with space research and satellite projects to expand their global navigation abilities.

Building on a Soviet-era foothold, Russia is expanding its monitoring stations for Glonass, its version of the Global Positioning System. At least three Russian stations are already operating in Antarctica, part of its effort to challenge the dominance of the American GPS, and new stations are planned for sites like the Russian base, in the shadow of the Orthodox Church of the Holy Trinity.

Elsewhere in Antarctica, Russian researchers boast of their recent discovery of a freshwater reserve the size of Lake Ontario after drilling through miles of solid ice.

“You can see that we’re here to stay,” said Vladimir Cheberdak, 57, chief of the Bellingshausen Station, as he sipped tea under a portrait of Fabian Gottlieb von Bellingshausen, an officer and later admiral in the Imperial Russian Navy who explored the Antarctic coast in 1820.

Beyond the Antarctic treaties, huge obstacles persist to tapping these resources, like drifting icebergs that could imperil offshore platforms. Then there is Antarctica’s remoteness, with some mineral deposits found in windswept locations on a continent that is larger than Europe and where winter temperatures hover around minus 70 Fahrenheit.

But advances in technology might make Antarctica a lot more accessible three decades from now. And even before then, scholars warn, the demand for resources in an energy-hungry world could raise pressure to renegotiate Antarctica’s treaties, possibly allowing more commercial endeavors here well before the prohibitions against them expire.

The research stations on King George Island offer a glimpse into the long game on this ice-blanketed continent as nations assert themselves, eroding the sway long held by countries like the United States, Britain, Australia and New Zealand.

Being stationed in Antarctica involves adapting to life on the planet’s driest, windiest and coldest continent, yet each nation manages to make itself at home.

Bearded Russian priests offer regular services at the Orthodox church for the 16 or so Russian speakers who spend the winter at the base, largely polar scientists in fields like glaciology and meteorology. Their number climbs to about 40 in the warmer summer months.

Inside the Bellingshausen base, satellites beam Russian television directly to flat screens on the wall. Researchers disappear for hours into a library with science fiction and detective novels. Others seek refuge in Bellingshausen’s banya, or sauna, where they unwind while sipping their ration of a couple of beers a week. Authentic flourishes include a broom of birch branches with which researchers can gently whip themselves.

“We sacrifice some of the nice things in life to go to Antarctica,” said Oleg Katorgin, 45, a construction supervisor who spent much of the past year at Bellingshausen. To help the time pass, he paints murals of idyllic tropical beach scenes, with mermaids. His paintings hang on the walls of the billiards room at Bellingshausen and a recreation area at an adjacent Chilean base overlooking Maxwell Bay.

China has arguably the fastest-growing operations in Antarctica. It opened its fourth station last year and is pressing ahead with plans to build a fifth. It is building its second icebreaking ship and setting up research drilling operations on an ice dome 13,422 feet above sea level that is one of the planet’s coldest places.

Chinese officials say the expansion in Antarctica prioritizes scientific research, but they also acknowledge that concerns about “resource security” influence their moves.

“We do weather monitoring here and other research,” Ning Xu, 53, the chief of the Chinese base, said over tea during a fierce blizzard in late November.

The cavernous base he leads resembles a snowed-in college campus on holiday break, with the capacity to sleep more than 10 times the 13 people who were staying on through the Antarctic winter.

Yong Yu, a Chinese microbiologist, showed off the spacious building, with empty desks under an illustrated timeline detailing the rapid growth of China’s Antarctic operations since the 1980s. “We now feel equipped to grow,” he said.

As some countries expand operations in Antarctica, the United States maintains three year-round stations on the continent with more than 1,000 people during the Southern Hemisphere’s summer, including those at the Amundsen-Scott station, built in 1956 at an elevation of 9,301 feet on a plateau at the South Pole. But American researchers quietly grumble about budget restraints and having far fewer icebreakers than Russia, limiting the reach of the United States in Antarctica.

Scholars warn that Antarctica’s political flux could blur the distinction between military and civilian activities long before the continent’s treaties come up for renegotiation, especially in parts of Antarctica that are ideal for intercepting signals from satellites or retasking satellite systems, potentially enhancing global electronic
intelligence operations.

Some countries have had a hard time here. Brazil opened a research station in 1984, but it was largely destroyed by a fire that killed two members of the navy in 2012, the same year that a diesel-laden Brazilian barge sank near the base. As if that were not enough, a Brazilian C-130 Hercules military transport plane has remained stranded near the runway of Chile’s air base here since it crash-landed in 2014.

Still, Brazil’s stretch of misfortune has created opportunities for China, with a Chinese company winning the $100 million contract in 2015 to rebuild the Brazilian station.

Amid all the changes, Antarctica maintains its allure. South Korea opened its second Antarctic research base in 2014, describing it as a way to test robots developed by Korean researchers for use in extreme conditions. With Russia’s help, Belarus is preparing to build its first Antarctic base. Colombia said this year that it planned to join other South American nations with bases in Antarctica.

“The old days of the Antarctic being dominated by the interests and wishes of white men from European, Australasian and North American states is over,” said Klaus Dodds, a politics scholar at the University of London who specializes in Antarctica. “The reality is that Antarctica is geopolitically contested.”