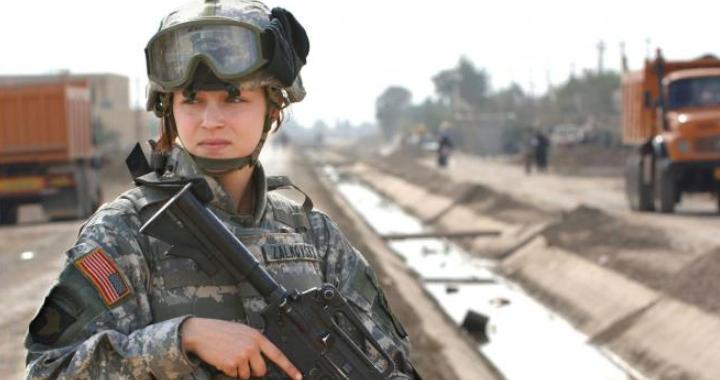 Seventy-four years ago, naval air forces of Japan attacked the US Navy at Pearl Harbor, Hawaii. The Japanese attack was swift and deadly and their armed forces surprised the world with their ferocity and professionalism.

The following day, President Roosevelt addressed Congress and after referring to December 7, 1941, as “a day which will live in infamy,” asked for a declaration of war against the Empire of Japan.

In the wake of the San Bernardino terrorist attacks, actually in less than 24 hours, President Obama rolled out Ash Carter 250 feet under radar coverage and announced that women will now be authorized to serve in the combat arms and special operations units without exception.

Carter’s announcement can be viewed here:

For those who are not familiar with the terms combat arms and special operations, these are the guys who fight our nation’s wars. Combat arms are the infantry, armor, cavalry and artillery. Special Operations Forces are the Rangers, the Green Berets, Delta Force, the Marine Raiders, Marine Recon and the Navy SEALS.

These are jobs that require incredible stamina, physical fitness and testosterone-laced aggressiveness.

The job of the combat arms soldier or Marine has not really changed in 2,000 years. It is to close with and kill the enemy; whether that means killing him with a tank SABOT round, shooting him with a machine gun, slitting his throat or sticking a bayonet in his guts.

Carter’s decision, which is really the White House’s decision, is based completely on politics and pandering to radical feminists. It has no basis in fact, and sadly there has been no consideration of how it will affect our national security.

Carter’s decision has just authorized the US military to commit suicide. The Pentagon is now on a kamikaze run into oblivion.

Here is the official announcement by the Army concerning the authorization to allow women to serve in the combat arms:

Full Integration of Women in the Army

The amount of Kool Aid consumed by generals these days could kill an elephant.

The combat arms and special operations require a tremendous amount of upper body strength to complete their missions. Women, on average, have 40% less upper body strength than men do. For years, the US Navy has been graduating women from basic training who can’t carry a fire hose up a flight of stairs and put out a fire. In fact, some statistics show that over 90% of women who go through Navy Basic Training can’t pass the fire hose test. We now have a Navy stocked with women on ships who are helpless if the ship is on fire.

The combat arms and special operations require a tremendous amount of stamina to run long distances carrying weight on one’s back between 60 – 120 pounds and sometimes more. The average 25 year old woman has the aerobic lung capacity of a 50 year old man.

Of course there are some women with awesome upper body strength and some women who can run rings around men their age. But, these women are not the norm.

Women also lack the testosterone that produces the intense aggressiveness that is needed to fight in combat and survive.

There have been countless studies done by just about every country in the world over the last forty years that indicate exactly what I just described. Most recently, the US Marine Corps spent 36 million dollars on a study that concluded what everyone already knew; all male units performed better in simulated combat conditions than coed units or all female units. This year, all 26 female officers failed to complete the Marine Corps Infantry Officers Course.

The military won’t use its own data. The Army claims it’s not hiding anything, but won’t send Congress the Ranger School records of the female graduates. All common sense has been thrown out the window.

It’s amazing how facts and reality are simply being ignored. The Israelis tried having women in combat back during the Six Day War in 1967. They found that units were ineffective because men were spending more time trying to protect women instead of engaging the enemy. The Israelis are realists. Women were taken out of the combat arms and turned into instructors in the IDF. There are a few units in the IDF now that are either completely all female or heavily female. But, they are security or intelligence oriented, which makes sense.

If women are physically equal to men, why aren’t they in the NFL, or the NBA? Why isn’t a woman teeing off with Jordan Spieth?

Of course this lunacy will not transcend into professional sports because there is too much money on the line. No one is going to pay to watch a female or coed NFL. End of that argument.

But, the military is easy to manipulate. The military has no profit margin. It just has a national security margin.

Then there are hygiene issues. During combat operations, combat troops can go weeks or months without showering. In Desert Storm, we went 50 days without a shower in the 7th Cavalry. In WWII, the troops who landed in Normandy went 50, 60, 70 days without any showers. How are females in combat units going to deal with that? Has Ash Carter mulled that one? How is the military going to accommodate women in the field? Are they going to have shower trucks following the troops into battle?

Feminists love to bash male bonding, the “Band of Brothers” mentality that embeds itself into combat arms troopers. Feminists believe that men and women will bond like men in combat. They’ll be bonding alright, but not like Dick Winters and Lewis Nixon and Ronald Speirs. Anyone who has served in a coed military unit knows this is true. Men and women serving together simply creates a different atmosphere.

How many people do you talk to that you worked with at a civilian job 30 years ago? Men that served in combat arms units in wars, still communicate even fifty years later. The bond is that strong. It cannot be replicated by social engineering or a pen stroke. To attempt to do so with coed units is beyond laughable.

I love hearing the arguments for women in combat.

Or, most officers support this now. Get on board USDW.

Sure they do, they’ve all been so brainwashed by a feminist oriented society how else would they think.

If the Pentagon is really determined to do this, the only realistic option is to actually adhere to standards, which pretty much disqualifies 99.99 percent of the women in this world from making it in special ops and about 94.99 percent from the combat arms. Women, who do make it, must adapt to a male culture, not a male culture becoming some kind of Gloria Steinem fantasy land.

The all-male macho culture of the military has had to adapt to a radical feminist culture, complete with pregnancy simulators, lactation stations, pink curtained cat holes and sensitivity training: the sinews of war for the US military in 2015.

Or, we could just go with all female units.

But, it won’t happen like that. The military will do the stupidest thing possible and create coed units everywhere. Apparently, the military will have to stock combat units with anywhere from 20 – 30 percent women.

So what happens in a war? It doesn’t take a rocket scientist to figure it out. We lose, they win.

We will have infantry units without the aggressiveness needed to accomplish their missions. We will have units collapse because the enemy will overrun and destroy us. American women fighting enemy male soldiers in hand to hand combat will be killed in droves.

We will have endless situations where men are constantly trying to protect women, a natural reaction the social engineers can’t seem to change. We will be a military that simply cannot fight and win. We will be facing an enemy which is not coed, which is not PC, an enemy that must be laughing right now.

Only a nation at the end of its ropes morally, physically and spiritually authorizes throwing women into the horrific conditions one experiences while serving in the combat arms or special ops in a war.

Only a society with a population that has no interest or grasp of the military anymore would stand by on the sidelines and watch this happen.

The women of America must now know that this decision will force them to have to register for the draft. Your sister, your mother, your wife and girlfriend are now all eligible to potentially get drafted and get their head blown off in war because feminist nuts think this is equal opportunity.

This won’t be a hollow military. This is going to be a doomed military. We are dooming ourselves to death and destruction and ruin and national disgrace on the battlefield.