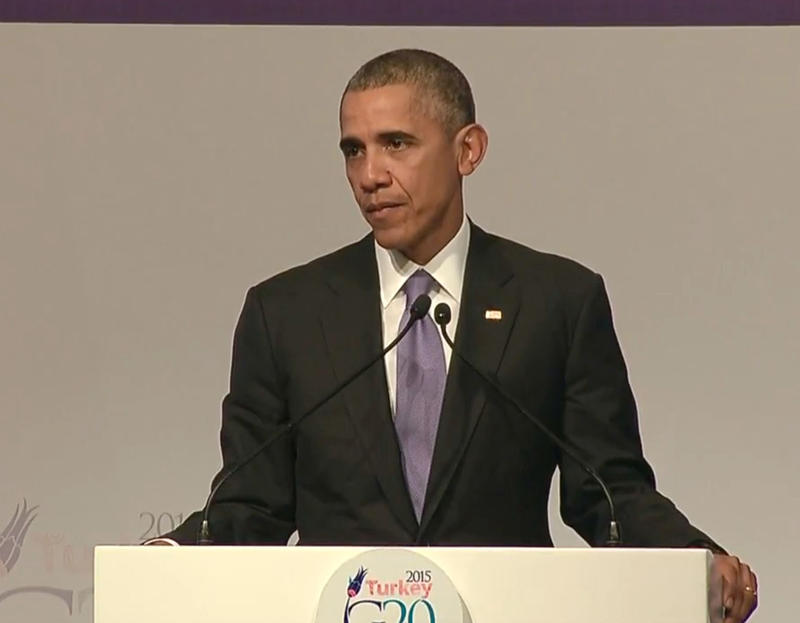 It seems that the War with ISIS entered warp speed this week. From the attacks in Paris, to police raids and foiled plots across the world, the West learned one harsh fact: we are at war and ISIS must be destroyed.

At this moment, Belgium is on high alert for an attack and France warns of a possible chemical or biological strike by ISIS.

Yet, with all these incidents taking place, all of the threats and the dead and maimed and Paris burning, the Obama administration continues to march to the sound of political correctness.

Only last week, and only hours before the Paris attacks, President Obama told us that ISIS was “contained.” Yesterday, Secretary of State John Kerry stated that we had “neutralized” Al-Qaeda, as the Mali attack was underway.

These guys sure have some great timing.

In Turkey this week, President Obama was eaten alive by the press, who is usually bowing and scraping to him. Loyal DNC operatives like Chuck Todd and Rachel Maddow seemed flustered by the President’s aloof approach to the war with ISIS. He seemed irritated that he even had to think about fighting ISIS. If only he could be back in the community center at 95th and Western in Chicago.

Obama is an advocate of the Neville Chamberlain school of warfare, which is to be politically correct and dithering to the point of absurdness, even if it means weakening your own country in the process.

Mr. Obama has forgotten one very important fact. The highest duty he has to his office is to protect the American people, not to pander to the Muslim Brotherhood and to Valerie Jarrett groupies.

Finally, the world has awoken from its slumber and is asking questions USDW and a myriad of military analysts have been asking for months. Why are we only conducting 10 sorties a day against ISIS? Why aren’t we hammering them with 200, 300, 400 sorties a day?

Last week, the US bombed ISIS fuel supply trucks for the first time! Apparently, the White House was afraid of collateral damage, meaning they were afraid to kill the drivers whom they consider to be non-combatants. The green light was finally given to the Air Force, which hit 130 trucks in one day.

The problem is not the US military. They know what to do. They just have to be ordered to do it.

One wonders what condition ISIS would be in right now if a President Reagan or Trump or Cruz was sitting in the Oval Office.

But, President Obama, Secretary Kerry and Hillary won’t even say Radical Islam. They won’t say we are at war with ISIS. Kerry even stated last week that the Charlie Hebdo attacks were “rational.” I’d like to know how killing other human beings over a cartoon is rational.

Meanwhile, Comrade Bernie Sanders consistently speaks about his outrage at the thought of sending US troops into harm’s way. He speaks of US soldiers, sailors, airmen and Marines as “our kids,” as if they were an Outward Bound college group on a four day hike in the Adirondacks.

Repeat after me, Radical Islam is the enemy and the Islamic State is the enemy; just as Nazism and Nazi Germany was the enemy in WWII.

Imagine FDR or Ike not being able to say Nazis or Nazism. It’s almost laughable if it wasn’t true.

We have a President, cabinet members and Democratic Party presidential candidates who can’t even say who the enemy is. You can’t fight an enemy that you won’t even identify.

The Obama administration’s actions are just representative of the mindless political correctness that has invaded the US like a Stage 4 cancer. Half of America is bogged down in political correctness insanity. One half of the nation is a bunch of placating, deferential wimps that need to find some True Grit.

We are a nation that has become afraid to say what we mean, what we think, what we want, what we should do, all out of concern for offending some imaginary boogeymen in cyber space.

President Obama is in a joust for the life of the free world, while carrying the flag of political correctness against the Knights of Death, known as ISIS. It is a joust that he is losing.

Meanwhile, ISIS and radical Islam are rampaging across the globe like Genghis Khan.

Compare Obama’s feckless leadership with that of Ronald Reagan who looked the Soviets in the eye and told them they were the evil empire and the USSR would soon be on the ash heap of history.

Where have you gone Ronald Reagan? Our nation turns its lonely eyes to you…

As of now, the US is losing the war with ISIS. We are losing because the President of the United States doesn’t want to win and is himself a victim of political correctness.

Political correctness is stopping us from fighting a war.

Political correctness is stopping us from winning a war.

Political correctness is stopping us from declaring war on ISIS.

There must be no more weakness in dealing with ISIS.

There must be no more rationalization of ISIS’ murdering and torture.

There must be no due process with ISIS.

For ISIS, due process is a bullet.