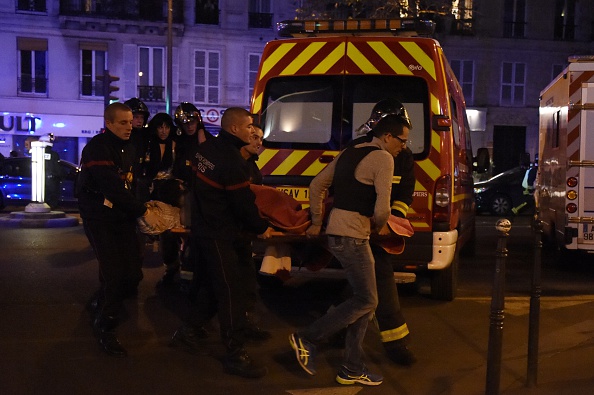 Paris is under a curfew for the first time since 1944.

Think about that. Not since World War II and the Nazi occupation has the City of Lights been under a curfew and martial law.

A state of emergency exists across France. The borders have been closed. The French Army is on the streets of Paris. The police now have the authority to raid homes and conduct searches with no legal precedent, other than the fact that the country is under a state of emergency.

Paris is a war zone tonight. Broken, bullet-ridden and blown up pieces of glass, furniture and human beings litter quaint sidewalks, cafes and buildings of the city.

At least 158 innocent people are dead and 200 wounded and the death toll is climbing.

In a series of coordinated attacks, terrorists detonated two suicide bombs in front of a packed soccer stadium. Then, others shot up a Cambodian restaurant in the city’s chic 10th Arrondissement.

Immediately after that, four terrorists hit the Bataclan Theater, where they killed over 100 people, before the police stormed the hall.

Reports indicate that there were six attacks, although reports from three attacks are sketchy right now.

The terrorists shouted Allah Akbar and this is for Syria! One terrorist who was captured told the police, “I am from ISIS. My orders are from Raqqah.”

On Twitter, ISIS is bragging about the attacks and doing everything but actually admitting responsibility for them.

And, only a few hours before the attacks, Obama was walking on sunshine and telling the press that ISIS was “contained.” The White House was doing handstands and high-fiving to the fact that we managed to send a Hellfire missile into Jihad John’s bathroom and blow him and his self-radicalization kit to kingdom come.

Unfortunately, that celebration lasted about three hours until the news from Paris broke, forcing Obama to turn off the Golf Channel, put his suit coat on and talk to the press.

If today’s events in Paris aren’t a wake-up call for Obama and Western Europe I don’t know what is.

The West, meaning the US and our gallant NATO allies have been dithering, politically correct old ladies when it comes to fighting ISIS. No one has had the moxie to take the fight to the evil, turban wearing maniacs.

Maybe now someone will have the guts to do what is needed.

Operation Stonewall Jackson would consists of a NATO operation to DESTROY, not defeat ISIS; meaning kill every ISIS terrorist, soldier and loyalist, destroy every ISIS gun, canteen and sword and obliterate them and their movement from the face of the earth, forever.

In the Middle East this would be done by a real bombing campaign, not the smoke and mirrors operation narrated by Admiral Kirby.

Operation Stonewall Jackson would also consist of continual and brutal special operations direct action missions, where ISIS thugs will be double tapped, bayoneted and garroted in their fart sacks by the Boys from Bragg and Coronado. Simply translated ISIS; we’re not taking you prisoner. The only person you’ll be surrendering to is Lucifer.

The US intelligence community needs to increase its HUMINT capabilities. More Human Intelligence or espionage is needed, meaning we need more sources inside ISIS. This will enable us to penetrate and destroy ISIS cells. While US Intelligence loves their Radio Shack equipment, the Brits and the French are great at the HUMINT business and the French are experts at running dirty wars. Just ask the Algerians.

For those Muslims that are loyal to the West or who wish to reform, stay out of the back blast area and maybe the civilized world will accept you again.

The double speak by the White House and the Europeans must cease immediately. Only then will we be able to make a serious effort to eradicate the ISIS cancer once and for all.