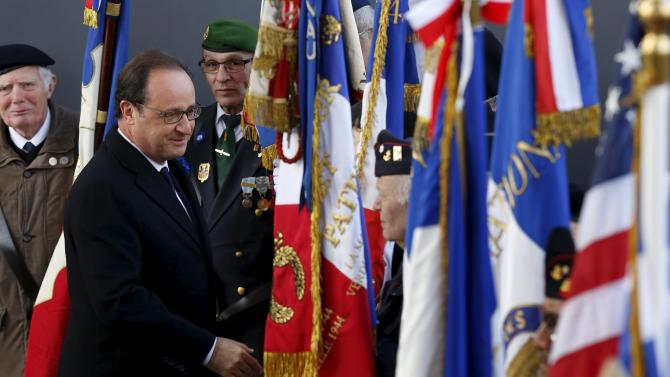 There are a lot of things we don’t yet about the Paris attacks. We do know one thing.

We are at war, but it’s a tidbit war. Our efforts, NATO’s efforts, need to be severely amped up if we are to strike a decisive blow to the madmen of ISIS.

It’s understandable that the US public, the White House and the Pentagon are fatigued from nearly 14 years of war with radical Islam. There is no will in the Obama administration to take the fight to ISIS. Unfortunately, we have no choice. If we don’t lead the way it’s not going to happen.

Hopefully, the attacks yesterday will cause the US and the West to have a shift in attitude.

Obama said all the right things yesterday. He spoke in canned phrases, mentioning that France is our oldest ally, and about the principles of liberaté, solidarité, yada, yada, yade-ité. But, we know he’ll do nothing more than he’s doing now, which basically includes saying ISIS is contained, while making plans to sneak 100,000 Syrian “refugees” into the US, while the public is distracted by Monday Night Football and Carrie Underwood’s legs. What the US needs now is Doc Holliday as President looking ISIS in the eye and saying, “I’m your Huckleberry ISIS. Say when…”

Obama can’t even blame the attacks on ISIS. He probably thinks greenhouse gases did it all.

Secretary of State John Kerry called for elections today in Syria. Nice thought, John Boy, but that might be a bit premature. First, we have to get rid of the bad guys before you can wheel in a team of old ladies from an Iowa Marie Callender’s to man the polling place. The terms ISIS and ballot box don’t really jive together do they?

Kerry also said that he stands with France. Of course he does. Who else is giving him free cycling equipment and tickets to the Tour de France every year? Vive Le Tour, John Boy.

In contrast to the wallflower comments by Obama and Kerry, the Vatican’s official statements on the attacks were quite martial in nature. The Rev. Federico Lombardi said in a statement early Saturday that the violence was “an attack on peace for all humanity.”

He said it requires “a decisive, supportive response on the part of all of us as we counter the spread of homicidal hatred in all of its forms.”

French President Francois Hollande said the ISIS attacks were “acts of war” and that the attacks were “committed by a terrorist army, the Islamic State group, a jihadist army, against France, against the values that we defend everywhere in the world, against what we are: a free country that means something to the whole planet.”

He said France “will be merciless toward the barbarians of Islamic State group.” France “will act by all means anywhere, inside or outside the country.”

“We are going to lead a war which will be pitiless,” he said at the Bataclan Theater.

Meanwhile, in Angela Merkel’s cloud cuckoo land, she responded to the Paris massacre by calling for “tolerance” towards migrants and respect for “the right of everyone to seek his fortune and live,” as her policy of allowing in hundreds of thousands of refugees came under fresh scrutiny.

“We believe in the right of everyone to seek his fortune and live, to the respect for the other and tolerance,” said Merkel. “We know that our free life is stronger than any terrorist. Let’s give the terrorists the answer by living our values confidently.”

Tolerance? Answer the terrorists by living our values confidently? What planet is this woman on? What fugue state is she wandering around in? What hallucinogenic shrooms is she brewing up?

Is she for real? I’m starting to think Merkel is a Stasi sleeper agent who has been recently deactivated to destroy her own country and the West.

She’s like a character right out of the old Charles Bronson movie, Telefon.

“France must determine who its friends are and who its enemies are. France’s enemies are those who maintain links with Islamism. Once and for all, France must recapture control of its borders,” said Le Pen.

“Islamist fundamentalism must be destroyed, radical mosques must be closed and radical clerics must be expelled. French terrorists must be stripped of their citizenship and banned from this country.”

How this will all turn out is up in the air. Obama has no will to fight. That’s obvious. The British will do whatever we do. The French are talking tough; for now. Merkel is a lost cause. Putin says he’s hitting ISIS, but he really isn’t. Will he jump on the bandwagon?

That depends if the bandwagon actually shows up.

“Today is Trinity Sunday. Centuries ago words were written to be a call and a spur to the faithful servants of Truth and Justice: Arm yourselves, and be ye men of valor, and be in readiness for the conflict; for it is better for us to perish in battle than to look upon the outrage of our nation and our altar. As the Will of God is in Heaven, even so let it be.”

France, ISIS, Merkel, Ray Starmann
One comment on “Does the West have the will to fight ISIS?”