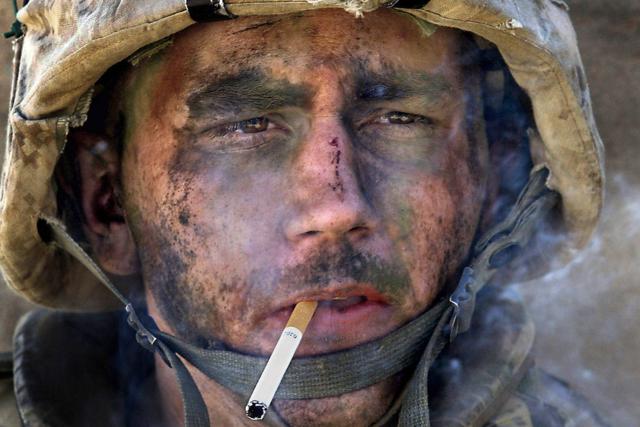 In America 180, everything is upside down. What kind of madcap lunatic asylum do we live in when the military has to ask for exemptions to keep women out of combat?

Thank God for the Marines. They want an exemption to prevent women from serving in the combat arms branches of the Marine Corps. The Navy surrendered its masculinity in 1991 after the Tailhook Affair and has evolved into the Love Boat with guns and fast planes. The Air Force disappeared over the horizon sometime in the late 90’s. The Army is advertising their 37 year old Mommy Ranger and sucking down enough Kool Aid to clean out half the grocery stores and lemonade stands in America.

The Pentagon has become a modern day Jonestown.

But, the Marines won’t go for it. They won’t go for the ridiculous notion that women can cut it in the combat arms and special operations. Unlike the other services, the Marines seem to remember that war is hell and unforgiving and more violent than any civilian can even imagine. The Marines know that in war there is no substitute for victory.

The Marines know, but no one else does. They are alone on an island, like one of the many they captured with so much blood and sacrifice and heartbreak in World War II.

About 400 male and 100 female Marines participated in the Ground Combat Element Integrated Task Force study, which was conducted from October 2014 to July 2015 at Camp Lejeune, NC, and Twentynine Palms, CA.

In September, the Marines released an executive summary that said women in the study sustained significantly higher injury rates than men, were less accurate with infantry weapons and had more difficulty moving “wounded” troops off the battlefield.

Sadly, the Marines had to waste 36 million in taxpayer dollars to tell us something we already knew. But, the liberals and feminist nuts refuse to accept the truth.

Liberals don’t like facts. They greatly dislike reality. They view the world they want it to be, rather than the way it really is.

“From a research perspective, there’s almost nothing you could reliably draw from this research,” Megan MacKenzie, a senior lecturer at the University of Sydney in Australia stated. MacKenzie is a radical feminist who has published several books about women in combat. She is an outspoken critic of the “Band of Brothers” myth and believes women can perform well in the combat arms. Of course she’s actually never been in combat herself, but why bring up such trivial details.

Apparently, the US military is taking recommendations from Australian feminist professors.

If the study didn’t persuade anyone, how about the fact that women went 0 for 26 at the Marine Infantry Officer Course this year. That fact, like the study and all others is shoved under a very large rug and masked by the Pentagon smoke machine.

Secretary of the Navy, Ray Mabus is the virtual Kool Aid King of the Pentagon E-Ring. Mabus is currently against any exemptions for the Marines. In a recent Washington Post op-ed piece, Mabus criticized his own organization by claiming the Marines were using “1992 language even as the way we fight and the landscape of our battles has significantly evolved from a quarter-century ago.”

What the hell is Mabus talking about? He makes it sound like war has evolved into some kind of milktoast Olympic sporting event like curling. According to this circus clown, there’s no need for soldiers or Marines to close with and destroy an armed enemy. Has Mabus heard about Fallujah or Tal Afar or a thousand and one other battlefields in Iraq and Afghanistan? Has he seen what is currently going on in the Middle East? This man’s state of delusion is off the charts.

Mabus states that “Every decision I make is purposefully in support of maximizing its combat effectiveness.” Really Mr. Secretary; if you cared about combat effectiveness and not about your Pentagon perks this wouldn’t even be a topic for discussion.

He continues with this obfuscation. “Second, this question is about standards, not gender.” Hmm, well, it seems that your own service has given you two studies in the last year that clearly show that women cannot hack it in the combat arms. What else do you need Mabus? Should God part the Potomac to prove his point?

Mabus further states. “As the nature of warfare becomes more dynamic and unpredictable, we need to be the strongest force possible, and diversity is one of our greatest strengths. When we talk about diversity, we mean the full spectrum of demographics, but even more important, we mean diversity of thinking. The Marine Corps Times has highlighted an anecdote about the creative, expeditious way a four-woman team in the Marine Corps’ study confronted an 8-foot obstacle. An American Forces Network report featured female Marines who demonstrated that gender does not define their service. These are the thinkers we need in every part of our force; they will maximize our combat effectiveness.”

In the Pentagon of 2015 we don’t need firepower and riflemen; we can win wars with diversity. And, how about those four women who figured out how to climb over an eight foot wall? What a combat multiplier that must be. They’re some real thinkers.

Newsflash Mabus: four Girl Scouts can figure out how to scale an eight foot wall.

The Marines are making a last stand for all of us. They are dealing with reality unlike Mabus, Ash Carter, Obama, MacKenzie and the buffoons running Ranger School. It’s time for the Pentagon to stop lying to itself and the nation it serves.