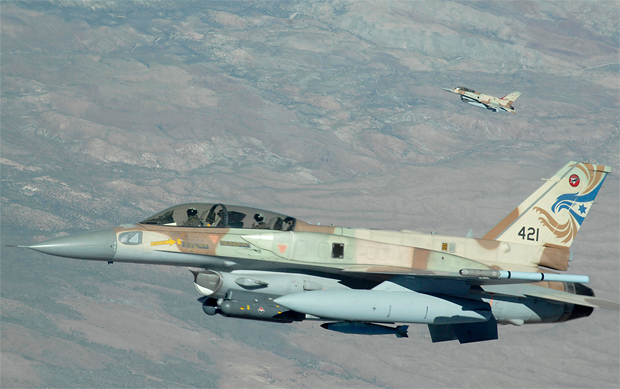 Trying to put order to chaos over Syria, the Russians and Israelis have established a hotline to coordinate air operations over Syria. This comes two days after a Russian Orlan 10 UAV was shot down over Turkey and a reported encounter between Israeli and Russian aircraft over Lebanon today.

Meanwhile, the Obama Administration declined a Russian invitation to come to Washington to discuss air coordination over Syria.

From the Israeli media outlet, Debka:

On Sunday, Oct. 18, Russian and Israeli air force headquarters near Latakia in Syria and Tel Aviv began practicing procedures for using the hot line they established last week to coordinate their operations in Syrian skies. They were putting into effect the agreement reached between Vladimir Putin and Binyamin Netanyahu in Moscow on Sept. 22, which was worked out in detail on Oct. 6 by Russian Dept. Chief of Staff Gen. Nikolay Bogdanovsky and his Israeli counterpart Gen. Yair Golan..

On Oct 15, the defense ministry in Moscow confirmed that “mutual information-sharing on the actions of aircraft has been established”  to avoid clashes in the skies of Syria “between the Russian aviation command center at the Hmeimim air base and a command post of the Israeli air force.” He added that the two sides were holding practice sessions on the new line.

The next day, Turkish fighters downed a Russian Orlan 10 UAV that intruded 3 km into their space. The Turks complained they had shot down the drone after repeated warnings to the Russian pilots. Since the drone has no pilots, the complaint must have been relayed to the Russian airbase in Syria. But in the absence of coordination, there was no answer.

Neither did Ankara have the option of resorting to a Washington line to the Kremlin, since the Obama administration had spurned Moscow’s proposal to send a military delegation to Washington for setting up a military coordination mechanism for their aerial operations over Syria.

The White House spokesman Josh Earnest dismissed the offer as “a sign of desperation for Mr. Putin’s air campaign.”

Syrian air space is frequented by the fighters, heavy bombers, transports and UAVs of a dozen air forces: Syria, Russia the US, Israel, Turkey and Iran as well as the US-led coalition planes of Canada, France, Australia, Jordan, the United Arab Emirates and Saudi Arabia. The miracle is that no major air disasters have so far occurred in skies crowded by this swarm of uncontrolled, un-monitored air traffic – all bent on their separate missions.

Most may be identified by radio signals or external markings and emblems. Some carry transponders which broadcast their location, identity, speed and direction.

Debkafile’s military and intelligence sources say it is safe to assume that the Russian end of the hot line with Israel at the Al-Hmeineem air base near Latakia, will be manned by Arab-speaking flight controllers.

In a report from the pro-Hezbollah media source, As Safir:

Russian forces warned Israel over IAF flights in Russian controlled airspace near the Syrian–Lebanese border area after Israeli jets were detected nearby, according to a report Friday in the Lebanese media outlet As Safir.

“Russian aircraft immediately blocked the Israeli jets’ path while they flew above the Akkar region in northern Lebanon. The Russians immediately sent a clear warning to the Israelis that entering Syrian airspace would be a pretext for opening fire,” the source said.

The incident occurred mere days after talks were held between Israeli and Russian officials regarding the shared airspace. The report claimed that the Russian message instructed the Israelis to stay away from Syrian airspace.

Lebanese officials quoted in the report said that Israeli aircraft typically fly over northern Lebanon on a daily basis, “and tended to fly on a path above the Akkar region, later conducting reconnaissance in a circular pattern above the Lebanese territorial waters, eventually reaching the Syrian territorial waters.”

The report quoted an official as saying that, “Their goal was to observe the movement of ships in the port of Tartus, as well as tracking the air traffic coming in and out of Latika airport – out of concern over possible weapons transfers to Hezbollah.”

In reference to the Russia UAV shot down at least two miles into Turkish airspace:

Prime Minister Davutoglu said: “We downed a drone yesterday.
“If it was a plane we’d do the same. Our rules of engagement are known.
“Whoever violates our borders, we will give them the necessary answer.”

The Russians denied the drone had been shot down.

A Russian minister insisted that all of its planes in Syria had safely returned to base at the time of the incident and that all its drones were operating “as planned”.

The Russian Defense Ministry also clarified it had established direct contact with the Turkish military to avoid dangerous incidents with flights near the border.

The incident between Israeli and Russian aircraft over Syria was not confirmed by either the Russians or the Israelis and the report may be incorrect.

Meanwhile, one must tread carefully through the continued and deliberate Russian misstatements as the skies over Syria become more crowded with military aircraft.